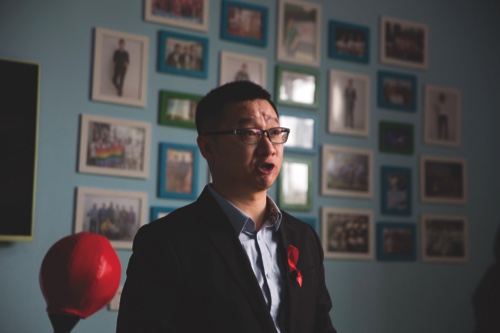 By day, Ma Baoli was a high-ranking officer in a seaside city police force. By night, he ran a website for gay people to share experiences and where he spoke under a pseudonym about the pressure he faced as a homosexual.
After several years, the police force found out and told him he could not run a private website that was earning money from advertisements while serving as a police officer.
Ma chose his website, a move that later proved fruitful. His Danlan.org has spawned a Chinese-language dating app for men called Blued that has garnered 15 million users, 3 million of them outside China, over two years.
And last month, his company, Blue City, received USD30 million in funding from Silicon Valley venture capital company DCM Ventures. Ma hopes to use the money to expand abroad and possibly prepare for an IPO. He is also considering launching a dating app for lesbians.
In a country where the government considers any activism dangerous and where homosexuality has traditionally been taboo, Ma has managed to build his business partly by reaching out to government agencies and showing them he can provide a public service in spreading safe-sex messages.
In 2012, he was invited to meet with now-Premier Li Keqiang because of his AIDS prevention work.
Wu Zunyou, director of the Chinese Center for Disease Control and Prevention’s AIDS and sexually transmitted diseases center, praised the app for its usefulness in conveying information to the lesbian, gay, bisexual and transgender, or LGBT, community.
“It’s very hard to receive so many registered users in such a short time,” Wu told The Associated Press last week at an AIDS awareness event held by Blue City and also attended by local government officials. “None of our public awareness websites can receive such attention. This is a very important channel to be able to spread information about AIDS prevention among the LGBT community.”
The app allows users to look for people by location or the last time they logged on. It also enables group settings so people can organize activities such as hiking or assembling a basketball team, as well as providing information from health authorities on locations for HIV testing and treatment.
Andrea Pastorelli, a policy specialist at the United Nations Development Programme, said the Chinese CDC had recognized the app’s usefulness in reaching people they were unable to.
“They are having a real issue reaching out to the most marginalized people and in China that’s where the epidemic is,” he said.
“The fact that they have been able to attract this much money shows that there is interest in the so-called pink market,” Pastorelli added. “Private companies are realizing that gay people exist and gay people represent a huge market.”
An investment manager at the Beijing office of DCM Ventures who asked not to be named because she was not authorized to speak to the media confirmed that the company had invested $30 million in Blue City, saying its future outlook was promising.
“Five percent of the total population are LGBT people,” she said. “Social attitudes toward gay people will become more and more tolerant in the future.” Louise Watt, Beijing  , AP