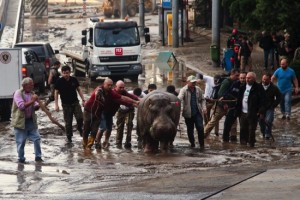 A Sunday, June 14, file photo of people assisting a hippopotamus that has been shot with a tranquilizer dart after it escaped from a flooded zoo in Tbilisi

A tiger that broke loose after severe flooding at the Tbilisi Zoo mauled a man to death yesterday before being shot by police.
The Interior Ministry in the former Soviet republic of Georgia said the tiger was hiding at an abandoned factory that had been turned into a construction market when he attacked the man yesterday. The victim later died of his wounds at a hospital.
“We entered the depot and, suddenly, a white tiger rushed out of an adjacent room and attacked one of the workers, jumping at his throat and mauling him,” colleague Alexander Shavbulashvili told The Associated Press. “We broke the window of another room to flee, and the sound of breaking glass must have scared it and it ran away.”
Police commandos rushed to the site and killed the tiger.
“It was a white tiger,” Interior Minister Vakhtang Gomelauri told the AP. “We wanted to sedate it, but it was very aggressive and we had to liquidate it.”
An earlier ministry report that the tiger also wounded another man was incorrect.
Zoo spokeswoman Khatia Basilashvili couldn’t immediately offer any details about the dead tiger.
The Georgian government yesterday harshly criticized zoo officials for failing to provide reliable information. On Tuesday, zoo officials said all eight lions, seven tigers and at least two of the zoo’s three jaguars were killed in the flooding in Georgia’s capital.
The flooding, triggered by torrential rains over the weekend, killed at least 19 people, destroyed houses and tore up roads. Six people remain missing.
The zoo said yesterday that one of its 17 penguins was found alive by Georgian border guards in the Kura River near the border with Azerbaijan, 40 kilometers (25 miles) east of the capital. Eight other penguins had been found alive earlier.
Zoo officials say less than half of the zoo’s 600 inhabitants have survived the flooding. Misha Dzhindzhikhashvili, Tbilisi, AP