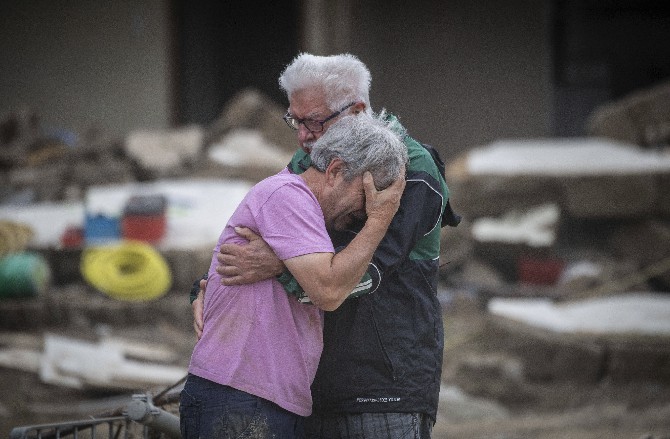 German officials defended their actions ahead of last week’s severe floods that caught many towns by surprise and killed 196 people in Western Europe, but they conceded that more lessons can be learned from the disaster.
As floodwaters receded yesterday, authorities continued searching for more victims and intensified their efforts to clean up a sodden swath of western Germany, eastern Belgium and the Netherlands.
So far, 117 people have been confirmed dead in the worst-affected German region, Rhineland-Palatinate, while 47 were killed in the neighboring state of North Rhine-Westphalia, and at least one in Bavaria, parts of which saw heavy rain and flooding over the weekend. The death toll in Belgium was 31.
Authorities said they were likely to find more victims among destroyed homes.
Weather officials had forecast the downpours that led to even small rivers swelling rapidly, but warnings of potentially catastrophic damage didn’t appear to have made it to many people in affected areas — often in the middle of the night.
Federal and state authorities faced criticism from some opposition politicians over the disaster, which comes as a national election looms in September. But Interior Minister Horst Seehofer dismissed suggestions that federal officials had made mistakes and said warnings were passed to local authorities “who make decisions on disaster protection.”
“I have to say that some of the things I’m hearing now are cheap election rhetoric,” Seehofer said during a visit to the Steinbach Reservoir in western Germany, where authorities say they no longer fear a dam breach. “Now really isn’t the hour for this.”
Seehofer underlined that message during a visit to Bad Neuenahr, in the worst-hit area, but said authorities will have to draw lessons once the immediate relief phase is over.
“Wherever we can improve anything — in alarms, in equipment … we must do so,” he said. “We owe that to the families who have been affected, and above all to the victims.”
The head of Germany’s civil protection agency said the weather service had “forecast relatively well” and that the country was well-prepared for flooding on its major rivers. Geir Moulson, Berlin, MDT/AP