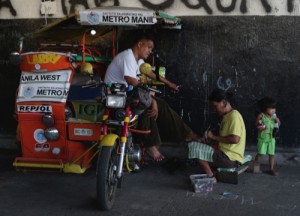 A Filipino tricycle driver has his nails cleaned for P60 (about USD1.40) in Manila

The Tourism Crisis Management Office (GGCT) last night issued a warning against traveling to the Philippines in the near future, due to the country’s worsening security conditions.
The office cited a reminder from the Department of Consular Affairs of the Chinese Ministry of Foreign Affairs, which advised Chinese citizens not to travel to the Philippines in the near future, and urged Chinese citizens and institutions in the Philippines to be more vigilant.
The warning came amid confirmation by Filipino police authorities that crime syndicates plan to attack Chinese embassies and institutions, as well as public facilities like shopping malls, in the Philippines.
So far, GGCT has received one enquiry but no requests for assistance. Information obtained by the office also suggested that there are currently no tourist groups from Macau in the Philippines.
The office asked residents to call 2833 3000 for any enquiries, or to contact the Chinese embassies for assistance if they are traveling overseas.