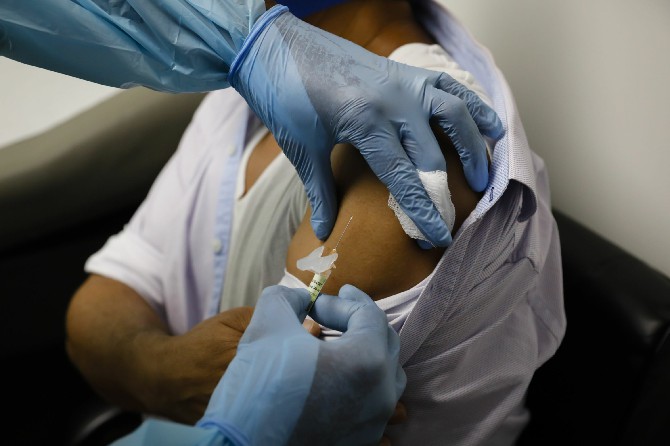 The Covid-19 vaccine being developed by Pfizer Inc. and BioNTech SE prevented more than 90% of infections in a study of tens of thousands of volunteers, the most encouraging scientific advance so far in the battle against the coronavirus.
Eight months into the worst pandemic in a century, the preliminary results pave the way for the companies to seek an emergency-use authorization from regulators if further research shows the shot is also safe.
Pfizer shares extended gains in premarket trading, rising about 15%, with BioNTech American depositary receipts up about 22%. The news added more than $500 billion to the value of the MSCI All Country World Index.
The findings are based on an interim analysis conducted after 94 participants, split between those who got a placebo and those who were vaccinated, contracted Covid-19. The trial will continue until 164 cases have occurred. If the data hold up and a key safety readout Pfizer expects in about a week also looks good, it could mean that the world has a vital new tool to control a pandemic that has killed more than 1.2 million people worldwide.
“This is about the best the news could possibly be for the world and for the United States and for public health,” said William Gruber, Pfizer senior vice president for vaccine clinical research and development. It was better than even the best result he had hoped for, he said.
With effectiveness for the first vaccines previously expected to be in the range of 60% to 70%, “more than 90% is extraordinary,” BioNTech Chief Executive Officer Ugur Sahin said.
“It shows that Covid-19 can be controlled,” Sahin said in an interview. “At the end of the day, it’s really a victory of science.”
The data do have limits. For now, few details on the vaccine’s efficacy are available.
However, the strong reading from the first large-scale trial to post efficacy results bodes well for other experimental vaccines, in particular one being developed by Moderna Inc. that uses similar technology. Its big trial could generate efficacy and safety results in weeks. If that study succeeds as well, there could be two vaccines available in the U.S. by around year-end.
Pfizer expects to get two months of safety follow-up data, a key metric required by U.S. regulators before an emergency authorization is granted, in the third week in November. If those findings raise no problems, Pfizer could apply for an authorization in the U.S. this month. A rolling review began in Europe last month, and Sahin said regulators there are working with BioNTech to “further accelerate the process.”
So far, the trial’s data monitoring committee has identified no serious safety concerns, Pfizer and BioNTech said.
The positive preliminary data mean the U.S. pharma giant and its German partner are on track to be first with a vaccine, after signing advance deals with governments worldwide for hundreds of thousands of doses. The companies have said they should be able to produce 1.3 billion doses – enough to vaccinate 650 million people – by the end of 2021. Only 50 million doses are expected to be available in 2020.
The shot relies on messenger RNA technology never before used in an approved medicine. Using mRNA, which essentially teaches the body’s cells to become vaccine factories, allowed it to be developed much faster than a traditional vaccine. MDT/Bloomberg