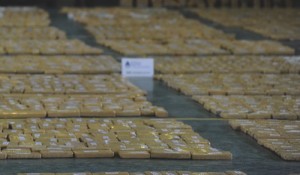 Police across Guangdong have busted a number of international drug-trafficking channels following a crackdown on major cross-border drug cases in the southern province in previous months, a senior police officer said, quoted by China Daily.
The crackdown has dealt a heavy blow to domestic and international drug traffickers and producers who have continuously tried to turn the prosperous province into a major drug distribution center, said Deng Jianwei, director of drug enforcement for the Guangdong provincial department of public security.
Police in Shenzhen seized more than 400 kilograms of methamphetamine, commonly known as “ice”, after cracking a major drug case in August. The drugs were seized before they could be sent abroad via the Hong Kong Special Administrative Region.
“Police detained six suspects, including the gang head surnamed Hu, and seized 3 vehicles that were used to transport the drug in the case. And it was the largest amount of ‘ice’ seized in a single case,” Deng told a press conference in Guangzhou yesterday.
Police in Foshan also seized more than 26.5 kilograms of heroin and detained 14 suspects after they jointly busted a major drug case with their counterparts from Yunnan province and the Guangxi Zhuang autonomous region on Aug 12.
According to the China Daily, investigations showed that the heroin seized in the case came from the so-called “Golden Triangle” of Thailand, Laos and Myanmar, providing a heavy blow to the drug traffickers there.
Guangzhou police seized another 25.5 kilograms of heroin and numerous drug production tools after they uncovered a drug production facility in Xintang township in Guangzhou’s suburban city of Zengcheng on Oct 28. Three suspects were detained in the case.
Police across Guangdong had detained 24,000 suspects in 23,000 drug cases by the end of October, Deng said, cited by the Chinese paper.
“The suspects that have been detained include 103 Hong Kong residents and a number of compatriots from Taiwan and residents from Southeast Asia,” Deng said.
More than 15 tons of various drugs were seized and over 200 drug production bases were busted in the first 10 months of the year when the province launched the Leiting Anti-Drug Operation campaign to fight drug-related crimes since the beginning of the year.
Authorities also raided 450 drug gangs that used to be active in Guangdong, the China Daily added.
But Deng reiterated that fighting drugs and drug-
related crimes is a long-term and difficult task in Guangdong, which has the country’s largest number of drug addicts. “The number of drug addicts has witnessed an annual growth of more than 40,000 people since 2009,” Deng said.
More than 457,000 drug addicts are registered across the province, accounting for one-sixth of the country’s total. Guangdong has been the focus of China’s anti-drug campaign for many years.
“And many overseas drug traffickers are using different kinds of ways to smuggle drugs in and out of the province,” Deng said.
Deng hinted that more special campaigns and operations will be launched to focus on fighting drugs and related crimes in the province in the following months, the paper concluded.