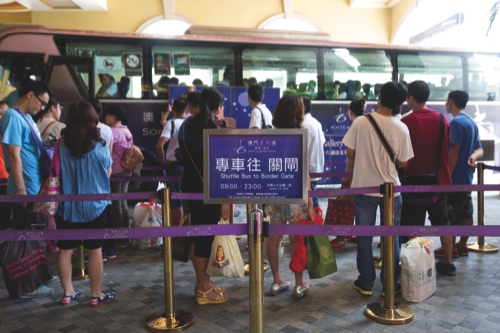 DSAT is in conversations with the casino operators regarding the commute of non-resident workers (TNR) and construction workers on casino projects. The existence of these discussions was mentioned yesterday by the director for the Transport Bureau (DSAT), Chiang Ngoc Vai, who was attending a TDM Radio talk show.
Chiang said that the conversations revolve around the idea of casino operators dispatching shuttles for their employees to satisfy their daily commuting needs.
Later, Chiang Ngoc Vai revealed that the authorities have received a positive response from the casino operators. “It may not be very long [before the policy is implemented,” he said.
Moreover, the deputy director said that DSAT has been in discussion with the casinos about the routes of their shuttle buses.
“We have been coordinating the routes they can pick, the routes they should pick and their pick up/drop off locations. We will keep coordinating with them,” he said.
As part of the election platform for the Chief Executive Election last month, Chui Sai On proposed that casino operators should provide accommodation and transportation for workers who came from other places.
However, during one of the meetings with CE Electoral College members, SJM CEO Ambrose So questioned how this policy could be realized.
He asked if the government would grant more land to casinos to build the accommodation.
Chui Sai On, on the other hand, said that the idea is only a general principle and the administration would come up with a more detailed plan in the future. JPL