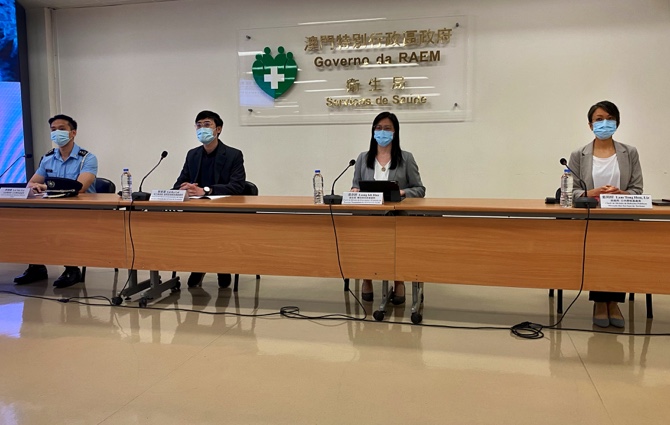 The local government is estimated to have spent around 120 million patacas on nucleic acid tests (NAT) alone, undertaken by those in Macau quarantine since the start of the Covid-19 pandemic, the coordinator of the local Center for Disease Control and Prevention, Dr. Leong Iek Hou, hinted yesterday in response to a media inquiry during the regular weekly briefing from the Novel Coronavirus Response and Coordination Center.

When questioned as to how much the government expected to save with a new measure requiring people undergoing quarantine to pay for their NATs, coming into force from May 8, Leong said, without advancing a concrete figure, “the price for the government is the same as for the public, so each NAT done in quarantine hotels that are not paid by the people must be paid by the government.” She added, “according to our figures, over 60,000 people have already undergone quarantine periods in Macau and although not all of them have done the same number of tests, we can use this number [eight per person] as a reference and we easily reach a rough calculation of how much the government has already spent.”

Such a calculation results in a sum of over 120 million patacas as, according to the latest data, 62,795 people have undergone quarantine in Macau up until April 27.

Leong reaffirmed that the purpose of this measure is to save public resources.

She also noted that there is a significant difference between the NATs performed in the community and those performed on people undergoing quarantine. The samples in quarantine are collected door-to-door and also tested separately one-by-one, factors that significantly increase the cost of the test.

The center had explained earlier this week in a statement that, since such expenses result from “travel abroad by the individuals concerned, to make good use of the public purse, payment must be made by the users of the services themselves.”

Leong also noted that there are risks involved in the procedures followed in the quarantine hotels.

“If there is a positive case, all staff need to be isolated and quarantined. All this has been taken into account by the service suppliers. The price of the service has been submitted in public tenders and different suppliers have presented similar prices,” she added.

“It does not have a direct relation with the number of days in medical observation. It has mostly to do with the area where the person comes from and the risk in that area. For people coming from higher-risk areas, we do more tests than to others coming from lower-risk areas,” Leong said. She added, “From most areas of the mainland we do five tests, for others, we do eight. Additionally, the frequency of the testing is related to the need to have as early as possible detection of an infection. If we do more tests, we can spot an infection at an early stage.”

Leong also noted that, currently, even in cases where people need to undergo eight NATs, the frequency is the same as for those who need to do five: one test per day.

“Even in the cases of eight tests, these are concentrated mostly on the first seven days of quarantine, and less on the end. This is done according to scientific data and aims to reduce the risk of infection and outbreak,” she further explained.