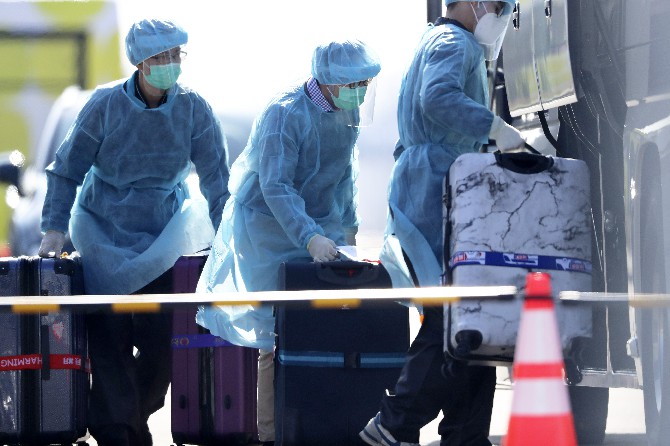 The government has decided to consider South Korea a high-risk contagion area for the Covid-19 coronavirus, prompting the enforcement of new immigration measures on those who have visited the country in the past 14 days.
The Novel Coronavirus Response and Coordination Center informed that the new measures would be enforced starting today.
The coordinator of the New Coronavirus Contingency Coordination Center, Leong Iek Hou, explained that the decision was based on recent significant growth in the number of confirmed cases in South Korea which suggests that an uncontrolled outbreak of disease is occurring.
Leong also explained that the measures now in force include passing a medical check-up for all those who have been in South Korea in the last 14 days. This measure applies to Korean visitors, Macau residents or anyone arriving through the Macau borders who has recently been to South Korea .
“We are considering South Korea as an area of high prevalence [of the disease]. From February 20, we started to enforce measures on all those people that want to enter Macau after having passed through China. [These people] must pass through a medical observation before entering Macau. From [today], we are considering South Korea in the same way,” Leong said.
“Those that have been in Korea in the previous 14 days before arriving at the borders of Macau will have to pass through a medical examination at the medical checkpoints located at the Workers Stadium or Pac On,” added Leong, referring to the Macao Federation of Trade Unions Workers Stadium and the Taipa Maritime Ferry Terminal respectively. “Only after the examination and tests are concluded can they enter Macau.”
Questioned on the topic by the media, Leong said that the medical examinations and tests performed at Macau medical checkpoints would take about six to eight hours, a length of time that is considered reasonable and similar to other parts of the world.
The officials at the press conference failed to present concrete data on the number of people that had entered Macau from South Korea in the last few days, as well as the number of Macau residents currently in South Korea.
Although all flights between Macau and South Korea have been canceled, a Public Security Police Force (PSP) representative said that 43 Koreans entered Macau “in the past few days.”
The PSP representative added that these visitors might have arrived not via the Macau International Airport, but via Hong Kong.
Furthermore, the PSP spokesperson said that flights between Macau and cities in South Korea have all been canceled until March 1.
Leong also said, in response to media questions, that for the time being, no similar actions have been taken against the neighboring regions of Hong Kong and Japan.
According to the coordinator of the Center, “the government is evaluating the condition, the outbreak figures, as well as the measures taken by the local governments in response to the disease.”
“[For Japan and Hong Kong] the situation is not yet of an alarming outbreak, and we know that the governments […] have been taking strict measures to prevent the contagion by examining and testing people of close contact,” said Leong.
The official noted that should the situation change, the local government can apply stricter border control measures against residents or travelers to any country or region in the world.

During yesterday’s press conference of the Novel Coronavirus Response and Coordination Center, a representative of the Higher Education Bureau (DSES) informed residents, especially those studying at Australian universities, to bring a certificate issued by the Public
Security Police Force (PSP) which certifies that they have been in Macau for the past 14 days prior to arriving in Australia. The document is being requested by Australian authorities and will save local students some hassle when arriving in Australia, a DSES representative said.