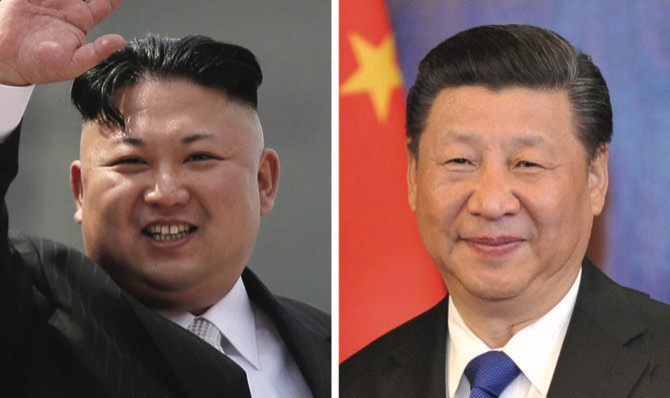 China and North Korea opened a new border crossing over the Yalu River, signaling aspirations for deeper economic ties between the neighbors even as Pyongyang’s trade remains crimped by international sanctions.

The border checkpoint at the foot of a new bridge opened yesterday, connecting the northeastern Chinese city of Jian with North Korea’s Manpo, Chinese state media reported. The China-DPRK Jian-Manpo highway connection is for passenger and cargo transport and hosts an advanced customs facility, the China News Service said.

The opening was marked by several tour buses crossing from the Chinese side and then returning from North Korea, the Yonhap News Agency of South Korea reported, citing a person familiar with the matter. The ceremony appeared to show that local Chinese officials were ready to step up trade and exchanges with North Korea in response to its call for economic development, according to Yonhap.

China provides a lifeline to North Korean leader Kim Jong Un and his state has long been dependent on Beijing’s help to keep its meager economy afloat. Kim’s summit with U.S. President Donald Trump in Hanoi broke down on Feb. 28 over sanctions that have cut Pyongyang off from global commerce and were imposed on North Korea for its pursuit of a nuclear arsenal.

It was unclear how the new border checkpoint — the fourth between China and North Korea — would operate under the sanctions, which ban or limit a broad range of goods from moving in or out of the country. The South Korean Unification Ministry declined to comment.

The economic penalties are expected to be a main topic of discussion when South Korean President Moon Jae-in meets Trump at the White House on Thursday. Moon, a long-time advocate of reconciliation with North Korea, has repeatedly played the role of mediator since he took office in May 2017 amid escalating threats of war between Trump and Kim.

The Manpo border area has drawn the attention of North Korea for years, with Kim’s father and former leader, Kim Jong Il, crossing there in 2010 in one of his rare trips outside the country, the Chosun newspaper of South Korea reported at the time. In the 2010 trip, Kim Jong Il visited the school his father and North Korean state founder Kim Il Sung attended on the Chinese side when he was a child.

China and North Korea agreed to embark on the bridge project in 2012 and completed construction in 2016, Yonhap reported. The opening was delayed by UN Security Council sanctions imposed on North Korea.

In 2017, China’s overall trade with North Korea declined by more than 10 percent to about USD5 billion, as Trump secured Beijing’s backing for four escalating rounds of sanctions in response to North Korea nuclear weapons program testing.

While official trade with China has slowed, North Korea has turned to other methods to evade sanctions, with a main source of activity being illegal high-seas cargo transfers with North Korean vessels, the U.S. and UN Security Council said in reports in March. Jon Herskovitz & Dandan Li, Bloomberg