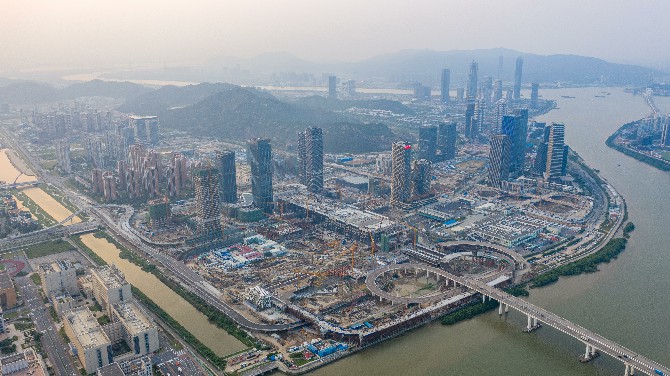 The Secretary for Economy and Finance Lei Wai Nong has recently met with Zhuhai authorities to discuss plans regarding the crackdown on illicit mainland real estate advertisements.
According to a statement released by the Macao Economic Bureau (DSE) yesterday, Lei met with high-ranking officials, including Zhuhai’s Deputy Party Committee Secretary Liu Jiawen, in the neighboring region.
The two sides discussed the protection of Macau residents’ rights in investing in mainland real estate projects.
According to the bureau, individuals, more specifically Macau residents, can check the “five certificates” status of a Zhuhai real estate project through Zhuhai’s real estate transaction commodity platform. The “five certificates” consist of five kinds of Mainland government approvals pertaining to a mainland housing project. The Macau government provides the link on the Macao Consumer Council’s website.
Officials from Zhuhai have pledged to step up “training” and “publicity of law” towards Zhuhai’s advertisement agencies, real estate companies and real estate agencies.
The discussion between the local government and the Zhuhai government is most likely the result of a series of recent complaints raised by some local residents, who claimed that they sustained financial losses after having invested in Guangdong real estate projects.
In the most recent alleged incident, a group of local residents said that they had invested in a housing project in Zhuhai. However, the construction process has been suspended as the developer lacks enough capital.
The Macau government does not have jurisdiction over a case outside of the city. Over the course of the past few years, DSE has been tackling illicit real estate advertisements in Macau.
As of January 18, and since the beginning of 2020, DSE opened 119 supervision files for housing advertisement cases, having issued penalties in relation to nine cases, all involving mainland projects.
Late last year, a group of local residents asked the SAR government for help after they encountered problems while purchasing properties in parts of mainland China, particularly in Zhuhai.
The petitioners had reportedly purchased properties from several different real estate projects in Zhuhai. Before they purchased the properties, the developer said that the project had been approved and could be used for commercial and residential purposes.
However, after they had made the purchase, they realized that the properties could only be used as offices, and not as houses.
This case was supported by lawmaker José Pereira Coutinho.