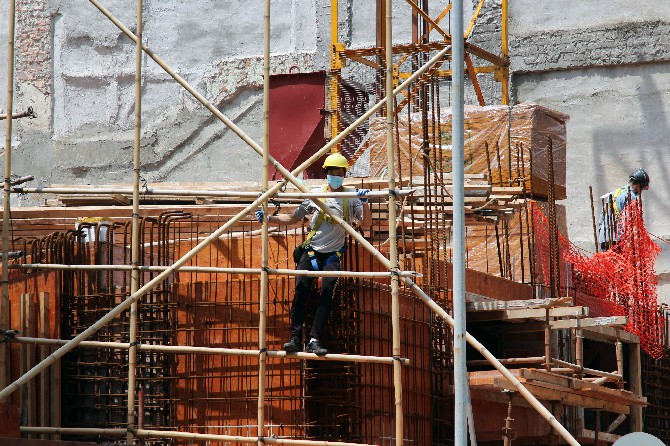 The government may impose stricter measures on the issuing of Non-Resident Worker’s Permits, commonly known as blue cards, in order to protect local workers amid the recent rise in unemployment.
Official data shows that the general unemployment rate for March-May 2020 stood at 2.4%, the highest figure since 2011, demonstrating the economic impact of Covid-19.
According to human resources experts, the government has been imposing tougher measures on those applying for new quotas from the Labour Affairs Bureau (DSAL).
“For new applications, I have seen that the government is definitely not as quick as before [to approve quotas], particularly for the unskilled workers,” said Jacinta Ho, the founder and managing director of JC Human Resources Consulting.
“With the clients I’m dealing with, the government, most of the time, is still renewing [quotas]. What I see is that if the company or organization is seen to have been taking good care of their local staff, then the government will renew [the working permits],” Ho added.
On the contrary, the consulting firm has had some of its clients show initiative and cancel quotas that could not be used due to the closure of the border and other reasons.
The city still has entry bans on foreigners in place that cover blue card holders and tourists from outside of the greater China region.
Recently, small and large corporations have let go of their staff, particularly non-resident workers. A few have even chartered flights to send their employees back to their home countries.
The Times contacted the DSAL and the Public Security Police Force, which oversees immigration matters in the SAR, to confirm whether there are plans to impose measures to protect local employment. No reply was received by press time.
In the city, laying off a resident identity card holder is somewhat stigmatized, as the law states that non-residents should only be hired based on resident workers’ unavailability or inability to occupy similar positions.
According to the aforementioned law, the needs of the labor market should be considered when issuing a quota.
For human resource expert Leanda Care, it has always a balancing act for Macau between the workforce demand and supply in terms of both worker numbers and skills shortages.
However, what the city needs is a list of vacancies that are to be filled by blue card quotas, whether these are domestic helper quotas, or skilled or unskilled working permits.
“These needs are communicated publicly [in other jurisdictions],” said Care, who is also a contributing editor at Macau Daily Times. “What we rarely see is a transparent needs analysis – a stock-take – of the human resource requirements now and also those projected into the future, and then have those needs matched against the local workforce supply.”
Such a scheme would make it clear to blue card applicants (both employers and employees) whether a position is likely to be approved.
Non-resident workers can also be said to contribute to the SAR’s cultural and ethnic diversity and such criteria could also be taken into account.
If such a system were in place, blue card workers would not be seen as taking jobs away from the local workforce, but as “crucial contributors” to Macau.
“The rhetoric of ‘blue card bad’ needs to change,” Care said.
Although the city’s unemployment rate has been stable and near zero for the past decade, the economic impact of Covid-19 has magnified issues for non-resident workers.
Tougher policies on the issuing of blue cards have been expected since Covid-19 took hold. However, the immediate impact of this policy has meant that employers are trying to backfill positions that were filled by blue card holders.
“Because the gaming revenue, which is the main driver for large hotel groups and concessionaires, recorded a sharp decrease, the backfills are not coming back so quickly,” said Alan Chan, managing director of TalentGroup Asia, a human resources solutions provider.
“Local employment is not going to see a dramatic benefit in the short run. Another key factor that has been pointed out is that job types including housekeeping, cleaning, security, are not the typical job types filled by locals easily,” Chan commented.
Echoing the same sentiment, Ho suggested that a good ratio between local and non-local residents should be in place. She noted that it would be difficult for local residents to fill the positions of non-resident workers as “they are not a fan of [these difficult] jobs.”
JC Human Resources Consulting has seen a sharp 80% to 90% decrease in job postings. The remaining postings are mostly from IT or financial institutions.
Furthermore, Jassy Santos, president of the Progressive Union of Domestic Workers of Macau, commented that tougher measures would not benefit non-residents. Lamenting the city’s new laws, Santos said non-resident workers, particularly domestic helpers, are always put at a disadvantage.
Santos was also referring to the law forbidding tourists from searching for jobs that will be enacted by October.
“I don’t think there will be local residents that would be interested in domestic work, which involves long hours and [low] wages,” said the leader of the migrant worker group.