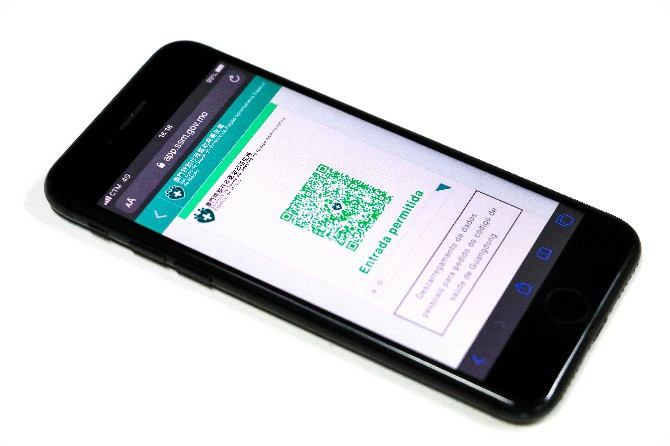 The Health Bureau has tightened its controls on anti-pandemic measures, requiring all individuals to present their valid green health code whilst entering designated venues.
The news was announced by Leong Iek Hou, coordinator at the Center for Disease Control and Prevention, during yesterday’s Covid-19 briefing.
The new regulations are a response to the ongoing Covid-19 situation in Guangdong province.
To comply with the new measures, visitors are required to present a green health code to be granted entry to casinos, hotels and guest houses, immigration halls and other related buildings, and medical institutions.
Other premises like offices of Government departments and agencies, shopping malls and restaurants should require visitors to show green health to allow their access to the venues.
Managers of other premises are allowed to decide – based on their own operating conditions – to request a valid health code shown by patrons, she added.

Transportation regulations
In alignment with the new anti-pandemic control measures, the Transport Bureau (DSAT) has enforced a new regulation as of yesterday that prohibits individuals with red and yellow health codes from getting onboard public transportation, including buses, taxis and light rail.
Drivers and public transport staff now have additional authority to scrutinize a passenger’s health code and have the right to refuse to offer a ride to those with yellow or red codes.

New entry guidelines for IAM
In the same briefing, the spokesperson from the Municipal Affairs Bureau (IAM) announced a new prevention measure mandating the display of a green code for an individual to gain access to the fourth and fifth categories of food and beverage establishments regulated and licensed by the IAM. Such a measure is effective from today onwards.
In response to a media query about what eateries are classified within IAM’s fourth and fifth categories, IAM’s spokesperson said, “Simply put, they are the establishments offering congee, noodles and rice.”
Those with a red or yellow health code are banned from entering these types of eateries.

6,000 tested on June 8
From June 7, the health code of those who visited Guangzhou or Foshan within the past 14 days changed from green to red. Those affected by the rule were required to undergo a Covid-19 test by 6 p.m. yesterday.
According to the official data, there were around 6,000 people who had to undergo nucleic acid testing yesterday, exceeding the government’s original estimation of 5,332.
The Health Bureau made a preliminary estimate on the number of people required to undergo testing based on declaration data from the health code system on June 6. However, a number of people who went to the two regions over the last 14 days but did not apply for their health code that day resulted in the original estimation being exceeded.

A new Covid-19 testing center, located at the Centro de Juventude da Areia Preta, has been designated as a temporary center to offer complimentary nucleic acid testing for cross-border students, starting today.
The station will open from Monday to Friday from 11 a.m. to 8 p.m. The government calls on students to make bookings online to secure a slot.
It comes as a relief to those who previously raised concerns that cross-border students would be subjected to an additional financial burden now that the validity period for a negative Covid-19 test result has been shortened from a week to two days.