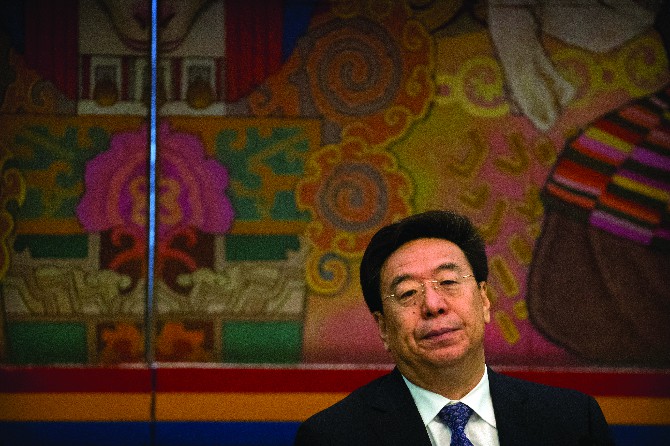 China’s top leader in Tibet lauded the progress his country has made developing the region, touting an ethnic-assimilation campaign that has fueled international accusations of human-rights abuses.
“More and more believers have been trained from pursuing a good afterlife to living a good life in this life, and religion has been increasingly compatible with a socialist society,” Wu Yingjie, the Communist Party chief of Tibet, said at a press briefing in Beijing Saturday.
Wu also listed a wide array of ways the ruling party has transformed the region where most people are Buddhist – from building schools and paved road to improvements in health care – as China marks the 70th anniversary on Sunday of an agreement giving it control of the region.
The event puts a renewed focus on Tibet as China deals with broad criticism of its policies in Xinjiang, where the U.S. and lawmakers in several other Western countries say Beijing is carrying out genocide. Both Tibet and Xinjiang have long endured intense social, security and religious controls, as China strives to suppress what it calls terrorist and separatist elements while providing economic opportunities.
In September last year, prominent Xinjiang researcher Adrian Zenz released a report alleging that Beijing was instituting a mass labor system in Tibet similar to the one that has ensnared Muslim Uyghurs. Tibet Governor Qi Zhala said at the time that forced labor transfer “does not exist,” maintaining the local government was focused on providing job training.

‘Equitable Education’
On Saturday, both Qi Zhala and Wu focused on the Chinese government’s efforts to provide education for Tibetans.
“Almost all the best buildings are schools,” Wu said. “Fair and equitable education is taken very seriously by government at all levels. There is a lot of funding and input.”
Wu said that “Chinese culture at large has all along provided a sentimental bond and a sense of belonging for all ethnic groups” in the western region he leads.
“Tibetan Buddhism is an important part of Chinese culture, and Tibetan cultures are important components of the Chinese culture,” he said.
The People’s Republic of China asserted sovereignty over Tibet in 1951 as part of a broader effort by Mao Zedong’s communists to consolidate control over territory historically claimed by China before decades of colonialism, war and internal strife. The Dalai Lama fled to India with help from the Central Intelligence Agency to escape a government crackdown in 1959, and a Tibetan-independence movement has endured ever since.
Riots erupted in the Tibetan capital of Lhasa in 2008 over allegations of religious oppression, leaving at least a dozen dead. A spate of self-immolations by ethnic Tibetans followed a few years later.
Beijing has blamed the Dalai Lama for fomenting the unrest, and that sentiment continues to be expressed by Chinese officials who see religion as the root cause of some of Tibet’s biggest challenges. China’s Communist Party is officially atheist.

Deadly Skirmishes
The Dalai Lama’s continued presence in India complicates China’s relationship with the South Asian nation. China and India fought sometime deadly skirmishes along their 3,488-kilometer disputed boundary last year and early in 2021, though tensions have eased in recent months
Earlier in May, Foreign Policy reported that China was building villages inside Bhutan, the Buddhist kingdom with which it also shares a border. The magazine concluded this was part of a campaign by Chinese leader Xi Jinping to “fortify the Tibetan borderlands.”
Neither Wu nor Qi Zhala would take questions from Bloomberg News at the briefing, one of several held by Communist Party officials as President Xi prepares to celebrate the ruling party’s 100th anniversary in July. Bloomberg