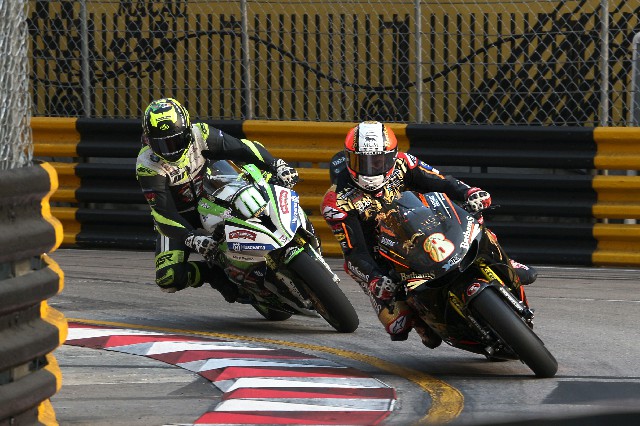 Michael Rutter is the winner of this year’s Macau Motorcycle Grand Prix, extending his record to nine wins at the Guia circuit.
Unlike his other wins, this came from a late off-track decision by the racing secretariat who decided to attribute the victory to Rutter after the race on Saturday afternoon was interrupted by red flags on two occasions.
After the second interruption, due to a crash involving multiple riders at the Police bend, the organizing committee decided not to restart the race.
As there were no results or victory attributed, teams and riders were expecting the race to resume on Sunday where at least seven or eight laps (out of 12) could be completed.
But after some discussion amongst organizers, the Macau Grand Prix Organizing Committee (MGPOC) decided on a different approach, handing the victory to Rutter based on the results of the only lap fully raced after the restart, a decision which did not make the riders and teams very happy.
Several riders expressed their disappointment with the decision not to reschedule the race through social media platforms while wishing those injured in the accident a speedy recovery.
An MGPOC spokesperson informed the media that there were two main reasons for not resuming the remaining part of the race on Sunday. The first reason was that the program was “too tight” with several races happening on the last day of the event; and the second was based on a more technical matter, relating to tire allocation with the MGPOC, as teams “had already used all the tires available.”
Three-time winner Peter Hickman, who led all the sessions over the weekend as well as during the race before both interruptions, told the media that the decision from MGPOC was very disappointing.
“It’s obviously very disappointing. […] To be honest, the best decision [the organizing committee] could have made would have been to restart the race. We didn’t come all the way to just have the race canceled [after two laps]; it’s just not right. Overall, very disappointing,” Hickman said.
The rider had his first-place position stripped in favor of his teammate Rutter, who led only for one lap after the restart. Hickman added that the justification provided based on tire allocation made no sense since the organizers did not consult the teams and riders to know if that was, in fact, a problem.
“They didn’t even ask us. How do they know? Even if we had no new tires we could still run on our old tires. It’s not a big deal, especially if we run a five or six-lap race, instead of 12 laps,” Hickman remarked.
Questioned by Times, a team manager who wished to remain anonymous agreed with Hickman, saying, “there is no problem with the tires. The tires are not used and these are not qualifying tires (that wear out easily). They can be cleaned and reheated back ready to race for seven or eight laps without a problem.” He also told the Times, also adding that he does not agree with the first justification given since “there is a lot of space in the program [on Sunday]. The program of the racing days is made very “loose,” giving a lot of time in between races in case there are red flags or damage to the barriers that need some time to be fixed,” he said. “Also you have a lot of time, roughly two-hours or more in between the GT race [FIA GT World Cup] and the F3 race [FIA F3 World Cup]. If there are no delays or red flags, it takes roughly 30 minutes to complete the laps that are missing,” he concluded saying that the organizers could have also decided to shorten the new race in one or two laps to fit the race well into Sunday’s program.
In Hickman’s opinion, the fact that there was no victor immediately announced and no prize award ceremony held also harmed the opportunities for sponsors’ exposure.
For a small part of the race, Hickman came out from the pole position and immediately took the lead, opening a time gap of seven seconds over Rutter.
David Johnson, Lee Johnson, and Davey Todd followed closely. This was until Rob Hodson crashed into the wall at the Faraway Hill, and behind him, Marek Cerveny let himself off his bike to avoid hitting Hodson’s bike, doubling the crash and leading to the race stopping.
Both riders had no injuries and managed to return to the pits on their motorcycles from the incident scene.
After a short break of cleaning the track area, the race was restarted with a new grid. This was when Rutter managed to overtake Hickman in the first turn. At the first pass of the finish line, Hickman was behind Rutter, and at the start of the third lap he regained the first position by braking into the Lisboa bend. However, only a few seconds later, a second incident happened at the Police bend involving six riders, after which the red flags were out again, and the race was not resumed.
Of the six involved, three riders were brought to the hospital but no life-threatening injuries were registered.
Two of them, Derek Sheils and Daniel Kruger were discharged from the hospital after a few hours. Erno Kostamo was hospitalized for surgery on a vertebra.
According to the MGPOC, the surgery went well and the rider is already recovering.
The MGPOC said that the administrative decision of retracting the initial decision to not announce a winner was based on a clause of the regulation that says that when a race is restarted, there is no minimum number of laps that must be completed in order to attribute a final classification, using the classification after a single lap to determine the final classification.
Rutter obtained his ninth win in Macau, while Hickman was second and the third was David Johnson.
Davey Todd and Lee Johnson completed the top 5 in a confusing Motorcycle GP.