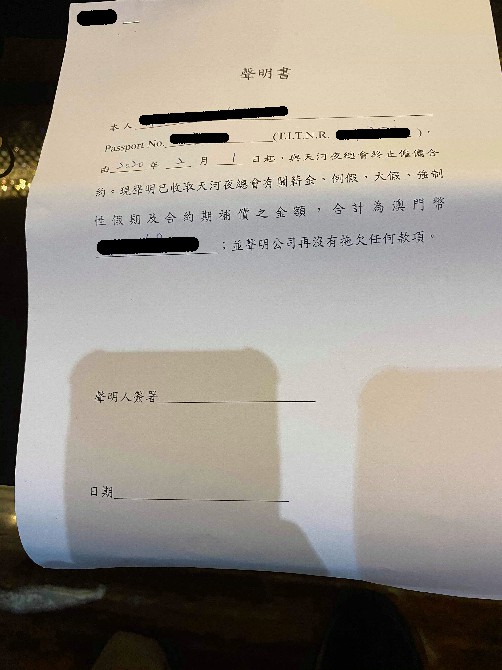 A growing number workers at a local nightclub and sauna are coming forward with consistent accounts of being made redundant, contrary to the insistence of the government last weekend that nobody is losing their job.
Eight more non-resident workers employed by the operator of a nightclub and sauna inside the Hotel Fortuna approached the Times yesterday to provide photographic and video evidence of attempts by their employer to dismiss them.
They say that, contrary to assurances made on Saturday by the government, only a selection of staff was contacted by the Labor Affairs Bureau (DSAL) and that no indication of continued employment was clarified.
The Times has learned that the nightclub and sauna operator had requested its workforce to attend a meeting on February 4 in two time slots; one at 4 p.m. and the other at 7 p.m.
During the said meeting, the employer instructed the first group to sign a letter – in a language they cannot read – informing them that it was only a statement to confirm that they had received their salary for the month of January.
They were also told that the letter stated they accepted the terms of the two-month leave of absence from work, due in part to the 15-day closure of gaming and other entertainment activities mandated by the Chief Executive.
Reviewed by the Times, the letter in fact acknowledges the termination of the worker and states that they have already received all due compensation.
“We were shocked as to why they were paying us in cash but we also thought that it was maybe due to the closure of the banks,” one worker recalled.
One of the workers from the first group realized the content of the letter, secretly took a photo of it and forwarded it to their other colleagues in the second group. Subsequently, the Times understands that the second group did not show up for the meeting.
Being from the first group, the eight workers that met with the Times yesterday said that they have not heard from their employer since the day they signed the letter.
On Saturday, the DSAL said that it had already contacted the workers and the employer representatives to follow up on the case.
“After the co-ordination, both parties have a clear knowledge that there are no dismissals. The employer representatives agree to protect the labor rights and interests of their workers according to the law, and coordinate with their workers about the work arrangements during the closure period,” the DSAL said in a statement without elaborating.
However, yesterday’s group claimed they have been unable to reach the DSAL despite repeated attempts to make contact. They claimed that the DSAL has only been in contact with workers from the second group, who had not yet signed the letter.
The Times tried to reach representatives of the DSAL yesterday to request further clarification, but was unsuccessful. A call to the emergency hotline number yesterday went straight to the mailbox, which was full.
One of the workers who was supposed to sign the letter during the second time slot – was reportedly given the contact of the head of the DSAL’s Labour Inspection Department, Kenny Lai, which is also the number publicized by the bureau as “enquiries or complaints on labor rights and interests.”
“Kenny Lai contacted our manager and they made an agreement to set up a meeting between [the parties],” said one worker yesterday, without indicating when the meeting with the bureau was held.
It is unclear what was discussed in the meeting. The second group was allegedly informed by the DSAL to go back to their workplace sometime this week for a revised version of the letter that would be in English; a language that the workers can read.
This group said that they fear they may have their blue cards canceled once the immigration office resumes its services.
“It is very unclear because they said that if we want to continue with our jobs, then we’ll have to wait, but wait for how long? They also said that we are free to look for another job, and said that if we want to go back to our home country, we should leave our blue cards with them,” said one of the workers.
In several videos covertly filmed by the workers of the February 4 meeting, and seen by the Times, people are hurrying the employees to sign the statement. One person in the video said, “You’re done signing? Go, go, go.”
The longest-serving of the workers had been with the company for 12 years, while the newest had joined the establishment just four months ago. According to the newest member of the group, he has not paid his agency fee yet amounting to 12,000 patacas. He now faces uncertainty as to whether or not he still has a job.
One of the workers tried to call the emergency hotline of the DSAL yesterday yet the automated response said that the hotline’s mailbox has reached maximum capacity.
In response to a growing number of reports suggesting that Filipino migrant workers are being affected by the challenges brought by the coronavirus known as 2019-nCoV, the Philippine Consulate General said in a video statement that it has already requested a meeting with DSAL officials to discuss reports of unfair labor practices against workers.
The Times asked the consulate yesterday whether they would also bring up this particular case to the bureau. However, no reply was given by press time.
Jassy Santos, president of the Progressive Labor Union of Domestic Workers, said that the association has been advising its fellow workers not to sign anything in a language they cannot understand.
“The problem is that we have never encountered a scenario such as that case in which the DSAL actually did something,” claimed Santos. “DSAL would always say that [the workers] are not kids who do not know what they are signing.”

An outbreak of norovirus at a southwestern Louisiana casino in the United States has left at least 200 people sick and has prompted an investigation by state health officials.
The U.S. Department of Health confirmed that the illnesses reported at L’Auberge Casino in Lake Charles last weekend were norovirus-related, news outlets reported. The highly contagious gastrointestinal illness that can cause vomiting, diarrhea and stomach pain.
The news comes as Macau’s Chief Executive has ordered the closure of all casino and entertainment facilities for 15 days to prevent the spread of the novel coronavirus that is believed to have originated in central China’s Hubei province.
The U.S. Department of Health regional medical director Dr. Lacey Cavanaugh said there were several hundred people at the Louisiana casino’s most recent events. She said the agency has received at least 200 surveys from people self-reporting virus symptoms.
Cavanaugh said people are contagious when they have symptoms and sometimes up to three weeks after the symptoms are gone. It’s unclear how the virus initially spread, but Cavanaugh said that doesn’t matter at this point.
“How it started at this point doesn’t really matter anymore, because now we are getting transmission within the community,” she said. “So, however people picked it up in that setting they are now taking it home and spreading it from one family member to another family member to another family member.”
To stop the spread, officials said people should stay home and wash their hands thoroughly. DB/AP