Growth of Angola’s economy expected to contract to 3.9 pct 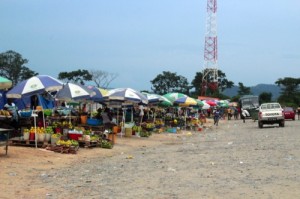 A road market in Angola

The rate of growth of Angola’s economy is expected to decelerate to 3.9 percent in 2014 after posting growth of 6.8 percent in 2013, with the agricultural sector offsetting a loss of revenue from oil sales, the International Monetary Fund (IMF) said Wednesday.
According to tables in the report released by the IMF, the oil sector is expected this year to contract by 3.5 percent whilst the non-oil sector will see growth of 7.3 percent.
The IMF also projects a return to growth in both sectors in 2015, with 2.6 percent and 7.3 percent for the oil and non-oil sectors, respectively, and the GDP growth is projected to post growth of 5.9 percent.
The IMF also said that budget execution, which over the last four years has posted surpluses, in 2014 will post a deficit of around 4 percent of gross domestic product (GDP).
Noting that, despite economic growth over the past decade, poverty and income inequality remains a reality, the IMF said that in the long term Angola needs to reduce its dependence on oil in order to reduce its vulnerabilities to external shocks and achieve sustainable growth.  MDT/Macauhub