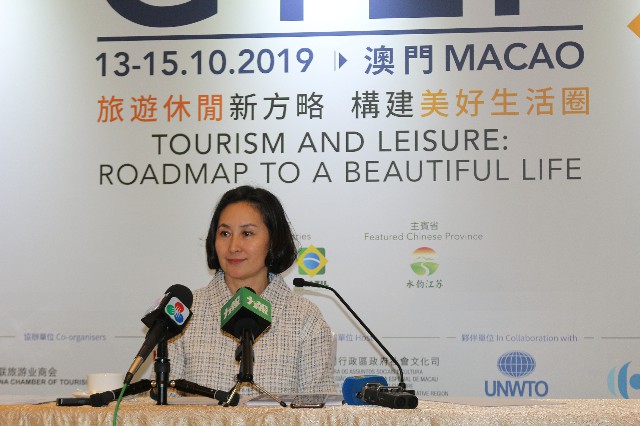 In response to a suggestion by Marcelo Álvaro Antônio, the Minister of Tourism in Brazil, regarding the country’s plans to invite investors to open up resorts and theme parks, Macau casino magnate Pansy Ho noted that, from a gaming operator’s perspective, Brazil has the basic requirements to open an integrated resort.
Ho made the comments during a press conference yesterday on the sidelines of the Global Tourism Economic Forum (GTEF) 2019.
According to Ho, Brazil, being one of the major countries and largest economies in Latin America, would also be able to develop similar types of integrated resorts to that of Macau.
“I’m quite sure there will be some of the existing [gaming operators] that would be clearly interested [in investing],” she said.
Meanwhile, on the topic of economic diversification, Ho said she believes that private companies have a big role to play to alleviate the problems within the sector. Ho, who is vice chairman and secretary-general of GTEF, said that the city’s concessionaires, which are all conglomerates, should also contribute to diversifying the sector.
“The conglomerates have all made a substantial investment in Macau. So obviously we do care, even if we’re not the ones running the sector,” said Ho.
“We do not want to see any segment of the industry be faced with a big [setback]. What we can do, I think, is [for gaming operators] to work together and work alongside the government,” she added.
Ho noted that gaming operators could provide more entertainment opportunities to alleviate some of the tourism operators’ pressure.
“We should be the ones coming up with all the solutions. We would like them to help us in logistics planning and tell more people about Macau.”
Yesterday, the Macao Government Tourism Office (MGTO) confirmed the government’s intent for the city to develop a total of 17 budget accommodation projects, with an unknown conclusion date. Currently, the Macau SAR has a total of 53 registered and licensed budget accommodation complexes with a total of 1,988 rooms.
“In the future, we think that there will be 17 new projects with 1,129 rooms to enter the market. They are mostly in the old district, quite old-scale,” said Helena de Senna Fernandes. The official did not announce when the project would be concluded.
Meanwhile, the tourism chief said that the bureau had been receiving opinions from the travel and tourist guide association, with some requesting government subsidy schemes in respect of the effect of the ongoing protest in Hong Kong, which has led to a drop in tourism arrivals by groups.
“We have heard from the travel agency sector that they do suffer due to the incidents [in Hong Kong] because of the decrease of the traditional Hong Kong-Macau tour groups,” Senna Fernandes said.
“What has come up are individual travelers. […] This has [dealt a] deficit in terms of tour group arrivals. There is a continuous change in the composition of these arrivals,” she added.
In order to counter the effect in Macau of the social unrest in Hong Kong, Ho suggested Macau partner with other neighboring areas, including Hengqin and Zhuhai, to create itineraries that would fit the so-called “one travel itinerary on multiple stops.”
“This social unrest is not going to have a major impact in Macau itself but it will be unfortunate if this is prolonged,” said Ho. “Then it would make travelers [alter] their planned trips.”