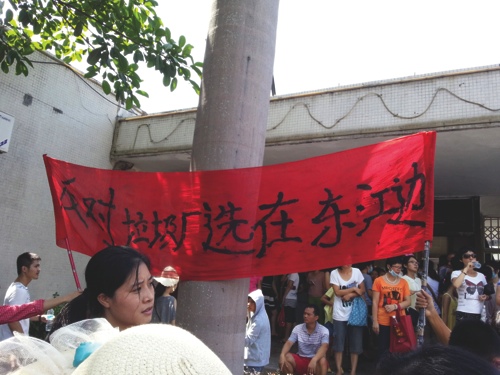 In this photo released by a protester who wished to remain anonymous, protesters hold up a banner which reads “Against garbage incinerator along east river” in Boluo county in south China’s Guangdong province 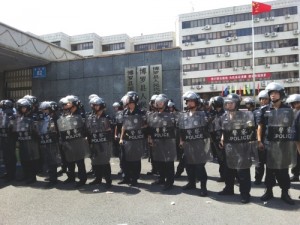 Residents in a southern Chinese town protested against a proposed garbage incinerator for a second straight day yesterday, according to witnesses, as police said ringleaders of earlier demonstrations that saw clashes with police should surrender.
Hundreds of people gathered on a long street in front of the offices of the government in Guangdong province’s Boluo county, with anti-riot police standing by, three residents said. They gave only their surnames, Chen, Huang and Wang, out of fear of reprisals from authorities.
The protest is the latest to highlight how Chinese have become increasingly wary of the environmental hazards of industrial projects but still lack public forums to voice their concerns and affect the government’s decision-making process.
Chen said he was among protesters who marched about 2 kilometers to the county government office in Luoyang town yesterday morning. At its peak, he estimated 3,000 to 4,000 people took part and he saw police with shields and batons take away three people who had thrown water bottles at them.
At the county offices, an official came out with a loudspeaker to tell the crowds that the government had not yet decided on a location for the incinerator, Chen said, adding that crowds had begun to disperse. “We have expressed our opinion,” he said by phone.
Huang estimated that about 1,000 people were gathered outside the offices, holding banners and chanting slogans, including “Protect our homeland” and “Drive out the garbage incinerator.” Some anti-riot police holding batons guarded the area, which had been blocked off to traffic, he said.
Participants and witnesses estimated that 10,000 to 20,000 people took to the streets Saturday to voice their fears of the plant’s potential impact on health and the environment, and provided photos showing thick crowds as wide as four car lanes moving down streets. They said the protest was orderly until police snatched banners from the protesters, dispersed crowds by force and dragged away demonstrators and spectators.
Police said in a statement late Saturday that a handful of people were suspected of illegally gathering crowds to disturb social order and traffic and that they had taken away 24 people for investigation.
A statement posted to the Boluo county public security bureau’s microblog yesterday afternoon said three people were placed under criminal detention, which means they could be formally arrested and tried in the future. Three others received an administrative punishment of up to 15 days’ detention for disturbing order in a public place. The rest were released after “being educated,” police said.
The earlier police statement said that a “handful of people with ulterior motives ignored laws to organize ordinary people who do not know the truth to illegally gather and demonstrate on the street, seriously affecting traffic and social order.”
Appearing to contradict the police statement, Boluo county’s Communist Party propaganda department said late Saturday that about 1,000 people had gathered in the county seat’s public square “spontaneously” to question the location for the proposed project, causing a lot of people to stop and watch. It said there had been no extreme behavior or blocking of roads. It said four sites had been set up in the county to listen to public opinion and give feedback on the proposed incinerator.
Police called on those who led the activities to surrender within three days or face serious punishment.
Environmental protests are on the rise in China, with the public becoming increasingly critical of the fouling of the country’s air, soil and waterways by decades of breakneck development. Most protests have taken place along China’s developed coastal region, which includes Guangdong, reflecting the area’s heavy pollution from industry as well as the wealthier citizenry’s rising demands.
Another protest over a proposed waste incinerator in the eastern city of Hangzhou left at least 10 demonstrators and 29 police officers injured in May. Louise Watt, Beijing, AP