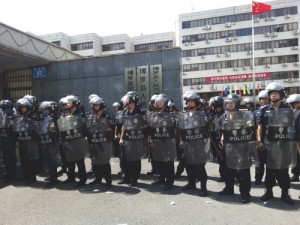 Residents of a town in southern China who oppose a planned trash incinerator have protested for a second weekend and the local government promised not to proceed without public approval.
People “illegally gathered” on Saturday to protest in Boluo County in Guangdong, according to a statement by police. It gave no details but vowed to “firmly attack” people who try to disrupt social order.
A local resident reached by phone, who would give only his surname, Huang, said witnesses told him several hundred people were involved. Huang said the witnesses told him five people were detained by police but three quickly released.
The county Communist Party branch promised in a statement “absolutely not to decide the location” of the incinerator without a scientific investigation and public approval.
China has some of the world’s most polluted air, water and soil, and communist authorities face mounting resistance to construction of chemical plants and other facilities residents worry will endanger their health.
In May, a protest over a planned waste incinerator in the eastern city of Hangzhou left at least 10 demonstrators and 29 police officers injured.
In Boluo County, some 3,000 to 4,000 people took part in protests last weekend. Police said 24 people were detained for investigation.
It said local authorities “respect the public’s opinion” and said the government would accept suggestions from the public about the location of the incinerator from Sept. 19 through Dec. 19.
The police statement said a man identified as Zhou Xiahui had spread false rumors on the Internet that authorities had given approval for a protest march Saturday. It said the “rumor monger” was ordered detained for five days as punishment. AP