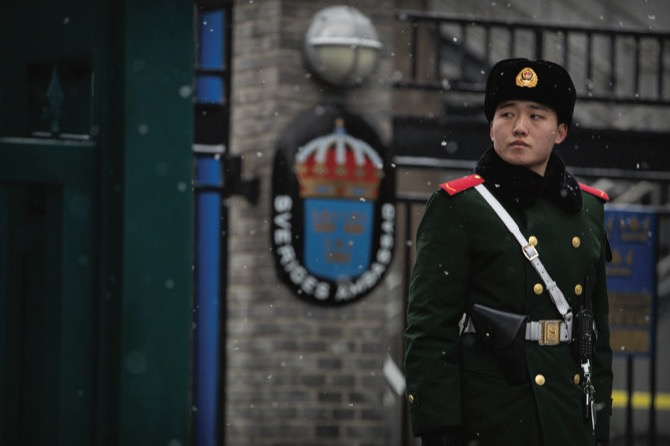 The gate of the Swedish Embassy in Beijing

Sweden’s ambassador to China is under internal investigation, the embassy said yesterday, following a claim that she set up a meeting between the daughter of a detained Swedish publisher and two businessmen that appeared to have gone awry.

Ambassador Anna Lindstedt returned to Stockholm on Wednesday to meet with officials from the foreign affairs ministry, the Swedish Embassy in Beijing said by phone. Lindstedt is not under criminal investigation.

The embassy declined to give further details, but the ambassador’s departure comes after Angela Gui, the daughter of detained Swedish book publisher Gui Minhai, published an account this week detailing a “strange” meeting with a pair of businessmen arranged by Lindstedt.

Gui wrote on Medium, an online publishing platform, that the businessmen threatened her after initially offering to help secure her father’s release from prison in China.

Gui, 53, went missing in 2015 from his seaside home in Thailand, turning up months later on Chinese television saying he had turned himself in for an alleged 2003 drunk driving accident in which a female college student was killed.

Gui was released in October after completing a two-year sentence, but committed to remaining in Ningbo, where he was born, until an investigation was completed into charges of running a business illegally.

In January 2018, he was taken off a train by Chinese police while in the presence of two Swedish diplomats with whom he was traveling to Beijing. Sweden said its officials were taking him to seek medical treatment. China said Gui was being investigated for leaking state secrets.

Gui later told pro-Beijing media outlets that he never wished to leave China and that Sweden was using his case to “create trouble” for China’s government. The statement from Gui, who spoke in a detention facility flanked by police, was immediately denounced by rights activists as coerced.

Gui’s daughter, Angela, is a Ph.D. candidate at the University of Cambridge who has become a self-described “accidental activist” for her father. She wrote in her Wednesday post that the role has landed her in a “fair number of bizarre situations,” but few of the same magnitude as her encounter with Lindstedt and the businessmen.

She said Lindstedt convinced her to fly to Stockholm on Jan. 24 to explore a “new approach” to her father’s case. During a two-day meeting with the businessmen and Lindstedt, she said, the businessmen told her they could arrange a Chinese visa and job for her and that they had connections within China’s ruling Communist Party.

They then told her they had already started to negotiate over her father’s case without her prior knowledge, according to Angela Gui. One businessman said it was possible that Gui Minhai would be released, but only if Angela Gui promised to stop publicizing her father’s case for a month.

Gui wrote that one of the men told her, “You have to trust me, or you will never see your father again.”

She later learned that no one at the Swedish foreign ministry had been informed of the meeting.

“I’m not going to be quiet in exchange for a visa and an arbitrary promise that my father ‘might’ be released,” she wrote. “Threats, verbal abuse, bribes, or flattery won’t change that.”

Sweden announced last month — prior to the incident described by Gui — that Lindstedt was to take on a new role as ambassador to the U.N. 2030 Agenda for Sustainable Development. She was slated to assume the position in March. Yanan Wang, Beijing, AP