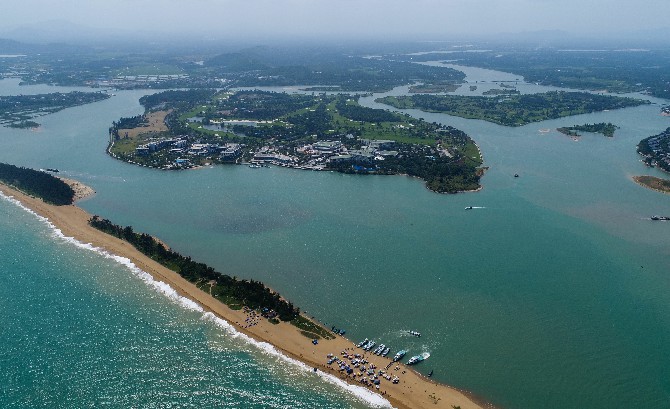 A Chinese official yesterday dismissed concerns that the Hainan free trade port will undermine Hong Kong’s status as a global financial, trading and shipping center.
With different orientations and priority industries, Hainan and Hong Kong are more complementary than competitive, Lin Nianxiu, deputy director of the National Development and Reform Commission, said at a press conference.
The construction of the Hainan free-trade port “will not bring shocks to Hong Kong,” said Lin, adding that the island province will focus on developing tourism, modern services, and high-tech industries.
“We should give full play to Hainan’s rich natural resources, unique geographical location, and its advantages of being backed by an ultra-large domestic market,” he said.
The country will work to promote the joint development of Hainan and the Guangdong-Hong Kong-Macau Greater Bay Area and ensure Hong Kong’s long-term prosperity and stability, Lin noted.
Last week, Chinese authorities released a master plan for the Hainan free trade port, aiming to build the southern island province into a globally-influential high-level free trade port by the middle of the century.
Recently, Chinese Vice Premier Han Zheng has praised solid efforts in fully implementing the master plan for the Hainan free-trade port in a bid to secure a solid start in its construction.
Han, also a member of the Standing Committee of the Political Bureau of the Communist Party of China Central Committee, made the remarks during his research tour in south China’s Hainan Province between May 30 and 31.
Han initially visited a construction site in Haikou Meilan International Airport to check the planning and construction, as well as the preparation work for the operation of the expansion project.
He emphasized efforts to step up the building of transport and other major projects. He also praised actively expanding effective investment developments while urging the local government of Hainan to accelerate the building of a modern and comprehensive transport system to provide a strong foundation for the construction of the free-trade port.
While visiting a new harbor under construction, Han stressed the importance of grasping the opportunity of building the so-called New International Land-Sea Trade Corridor and nurturing international sea routes in order to build an international container hub.
Efforts should also be made to enhance independent innovation capabilities, reinforce abilities to make key technology breakthroughs and safeguard the security of internet information and economic operation, he said, while visiting a software park.
At a duty-free store in Haikou, Han called for efforts to develop Hainan into an international tourism and consumption center.
Last week, The Global Times, the mouthpiece of China’s Government, stated in an editorial that, “Hainan will become a free trade port closely related to Hong Kong, yet will maintain some distance. With favorable housing conditions and natural environment, and sufficient talent resources, Hainan is capable of attracting financial institutions to extend long-term investment businesses from Hong Kong, and thereafter explore business in the Chinese mainland.”
The Global Times continues: “Hong Kong’s major advantages are free capital convertibility, entry and exit, as well as a sound shorting and hedging mechanism, which is more suitable for short-term capital hoping for high returns. By contrast, Hainan, with an increasingly open financial market, will be a better choice for foreign investors who intend to further expand in the Chinese mainland market in the long run.”
“It would be a triple-win strategy for Hainan, Hong Kong and foreign capital, combining the advantages of the two financial markets and allowing investors to form better portfolios to make both short-term and long-term profits,” the editorial concludes. MDT/Agencies