Harris, speaking at the top of a bilateral meeting with Vietnamese Prime Minister Pham Minh Chinh, said that the doses would begin to arrive within the next 24 hours. That brings the total vaccine donation to Vietnam to 6 million doses from the U.S.

In addition to the new vaccine doses, the U.S. will provide $23 million in American Rescue Plan and emergency funding through the Centers for Disease Control and the United States Agency for International Development to help Vietnam expand distribution and access to vaccines, combat the COVID-19 pandemic and prepare for future disease threats. The Defense Department is also delivering 77 freezers to store the vaccines throughout the country.

After her bilateral meetings, Harris took a moment of silence in the pouring rain and laid flowers at the monument where John McCain’s plane was shot down by the North Vietnamese in 1967. She noted it was the three-year anniversary of Sen. McCain’s death.

The new coronavirus aid is part of a wide-ranging set of announcements on new partnerships and support for Vietnam delivered to coincide with Harris’ visit to the nation, during her week-long swing through Southeast Asia. The trip, which included a visit to Singapore earlier in the week, is aimed at strengthening U.S. relationships in the Indo-Pacific region to counter Chinese influence there.

The announcements include new investments to help Vietnam transition to cleaner energy systems and expand the use of electric vehicles, a reduction in tariffs on U.S. exports of agricultural goods, and millions in aid to clear unexploded weapons leftover from the Vietnam War.

During her meeting with Vietnamese President Ngyuen Xuan Phuc, Harris also expressed support for sending an additional U.S. Coast Guard cutter to Vietnam, to help defend its security interests in the South China Sea, and issued a sharp critique of Beijing’s incursions in the disputed waterway.

“We need to find ways to pressure and raise the pressure, frankly, on Beijing to abide by the United Nations Convention on the Law of the Sea, and to challenge its bullying and excessive maritime claims,” she said, adding that the U.S. would “maintain a strong presence in the South China Sea” to challenge China.

And she embraced elevating the relationship with Vietnam from a comprehensive partnership to a strategic partnership, a diplomatic designation that would reflect the deepening relationship between the two former foes.

Her comments follow sharp words towards Beijing during a speech in Singapore Tuesday, where she said their actions in the South China Sea amount to “coercion” and “intimidation.”

On Wednesday in Vietnam, Harris also said that the U.S. supports sending the country an additional U.S. Coast Guard cutter, to help defend its security interests in the South China Sea. And she embraced elevating the relationship with Vietnam from a comprehensive partnership to a strategic partnership, a diplomatic designation that would reflect the deepening relationship between the two former foes.

They’re the latest moves by the Biden administration to strengthen its alliances in the Indo-Pacific region in an effort to counter China’s influence. Harris’ trip there, which included a stop in Singapore earlier this week, is aimed at broadening U.S. engagement with both nations and affirming the U.S. commitment to the region.

Harris, who is the first U.S. vice president to visit Vietnam, told the nation’s president that “our relationship has come a long way in a quarter of a century.”

She also announced the launch of a new Centers for Disease Control and Prevention Southeast Asia regional office. The new CDC office will be one of four regional offices globally, and it’s focused on collaborating with regional governments on research and training to deal with and prevent global health crises.

The announcement comes as Vietnam is grappling with record high coronavirus infections in Vietnam driven by the delta variant and stubbornly low vaccination rates in the country. The surge in cases prompted a recent lockdown in Ho Chi Minh City, the nation’s business hub and the epicenter of the latest outbreak.

In the afternoon, Harris will join a health security event with the health ministers from the Association of Southeast Asian Nations group and Papua New Guinea, where she’ll speak more about the launch of the CDC center.

But even as Harris hopes to keep her focus squarely on those key agenda items in Vietnam, her visit will be shadowed by a recent security scare in Vietnam and the ongoing developments in the U.S. exit from Afghanistan.

Kamala Harris’ flight to Vietnam was delayed for hours Tuesday afternoon after the vice president’s office was made aware of an investigation into two possible cases of the so-called Havana Syndrome in Hanoi, according to administration officials.

The Havana Syndrome is the name for a rash of mysterious health incidents first reported by American diplomats and other government employees in the Cuban capital beginning in 2016. 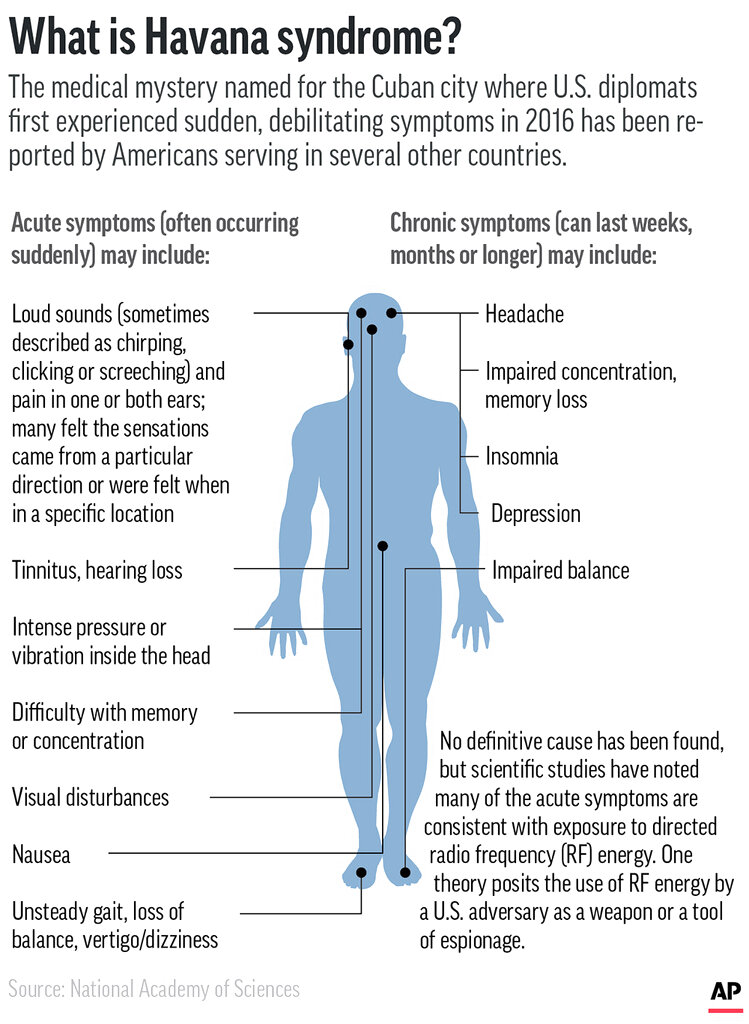 Harris has yet to comment publicly on the developments, but they’ll weigh heavily on officials while she participates in a lease signing for the U.S. Embassy in Hanoi, with embassy staff attending.

And her swing through Vietnam is certain to draw some unwanted comparisons between the humiliating withdrawal of U.S. troops in 1975 and the tumultuous effort this week to evacuate Americans and allies from Afghanistan.

U.S. Sen. Bill Hagerty, a Tennessee Republican and a former U.S. ambassador to Japan, noted that those images are unavoidable for many Americans as Harris stops in the country.

“She’s going to have a challenge from a domestic public relations standpoint, because everyone in America right now is associating the images that they’re seeing on TV with the collapse of Kabul, with the images of Americans being lifted from the rooftop of our embassy in Saigon,” he said.

Hagerty also said that Harris will need to reassure the Vietnamese that America remains a “beacon of liberty and freedom in the world” and a “strong partner” in the region.

But Gregory Poling, a senior fellow for Asia at the Center for Strategic and International Studies, suggested that Vietnam could offer the vice president an opportunity to offer a more optimistic vision for what a relationship with a former foe can become.

“Simply by being there and engaging in this process, it shows the remarkable progress in rapprochement between the U.S. and Vietnam,” Poling said. “It’s possibly marginally good for them to show that — who in 1975 would believe that this is where the U.S. economic relationship would be?”