Health and fitness| The art of being lazy 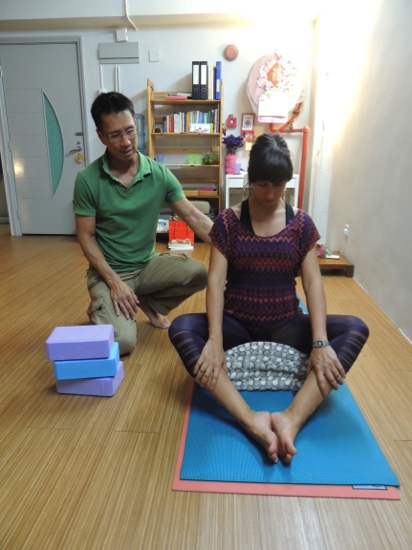 It’s the ultimate in efficiency. The art of being lazy. That’s astonishingly what renowned fitness trainer and movement specialist Edward Yu is hoping to teach the perennially stressed citizens of Macau to do in a series of workshops and classes taking place this May.
During his month-long visit, the Portugal-based, American author and fitness instructor is aiming to show people how to achieve more strength and fitness with less effort. His approach, called ‘The Art of Slowing Down’, is rooted in the Feldenkrais Method, as well as in the ancient Chinese martial arts of bagua and tai chi.
First pioneered by Dr Moshe Feldenkrais, a Belorussian Jew who amazingly walked all the way to Palestine when he was 13, Feldenkrais became a physicist, judo expert, mechanical engineer and educator. Consequently, according to Edward Yu, the Feldenkrais method is heavily rooted in judo. “When people come to class, they don’t realize that they’re doing judo at 1/1000th of the speed”, he says, “Because judo is physics applied to the human body. It’s biomechanics; how to become more efficient in movement”. In other words, it’s the art of “maximum efficiency with minimum effort”. “How do you be lazy and do so many things? I think it’s pretty awesome”, he adds.
Using the example of judo, how does a judo master in his 70s beat a black belt in his 20s and toss them around? “The difference is in sensitivity and learning”, the fitness expert states. “The master is extremely sensitive. In a sense Feldenkrais is about sensitivity. Using constraints to develop sensitivity”.
So what’s taking a Feldenkrais class like? Yu jokes that it’s basically “a lot of rolling around on the floor”. The technique uses gentle, slow movements and directed attention to help people improve problem areas so that they can increase their ease of movement, flexibility and coordination.
“Maybe you would come to me with some problem, e.g. I have shoulder pain, I can’t twist, I don’t have the flexibility to do a certain movement, and we would look at that movement”, he describes. “And if we look at it in earnest, we’ll discover it’s an extraordinarily complex movement and we have to break it down. And one way to break it down is to start on your back, start on your stomach, start on your side, in a different configuration that’s simpler”.
The movement specialist has worked with all manner of people, from Olympic medalists, professional soccer players, principal dancers in the Portuguese ‘Companhia Nacional de Bailado’ dance company, to yoga teachers, stroke recoverees and average people who simply want to improve their strength or get out of pain. 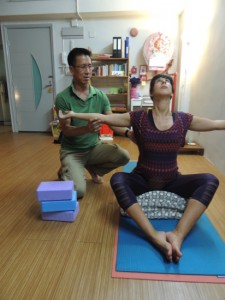 As well as applying to movement, the system equally applies to all forms of learning. According to Yu, the conventional model for learning, exercise or anything in life “is trying harder and trying to replicate” it. But in his experience an alternative is using “an imaginative use of constraints”. “I believe that can take us deeper”, he says. “I just happen to be bringing a system… of very imaginative use of constraints to break apart movements and then put them back together.”
“The pitfall is that human movement is so extraordinarily complex that we need a lot more information”, he says. “I believe what great thing yogis or scientists have done, or great artists or writers have done, which is they create constraints and explore within those constraints, and in that exploration, something new emerges, and we can call it knowledge”.
Once they embark on Feldenkrais classes, people consequently become more aware of how they use their bodies –
from walking, running, to even just standing. Through the meticulous exploration of movement performed in specific sequences, multiple layers of the brain and nervous system are engaged. By increasing sensitivity, the method then helps people foster awareness in all areas of life.
“I believe all intellectual knowledge is rooted in the body”, Yu states. “I’m borrowing from Feldenkrais and other somatic pioneers; that idea comes from them. So that means if something is not clear in the sensation of your own body, it can’t be clear between your ears so to speak. You can’t work in abstraction without first working with the literal pieces of life”.
Edward Yu’s weekly classes and weekend Feldenkrais workshops are currently running at the Carmo Swimming Pool, Yoga Loft Macau and the Fit for Life Medical Center until the end of the month. More information is available on www.artofslowingdown.com and by contacting yoyo_ed@mac.com.