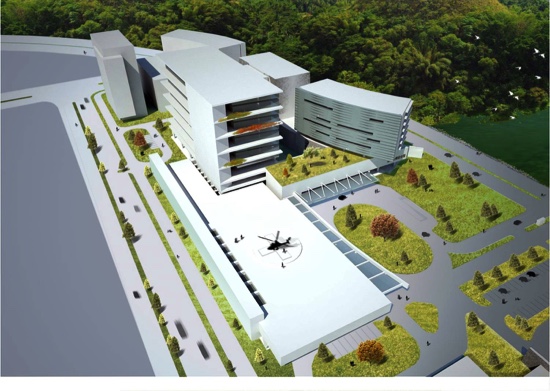 The construction of Macau’s second public hospital might be delayed as the initial design project has been expanded, the Health Bureau (SSM) confirmed in a statement yesterday. A concrete schedule for the hospital’s construction works will only be disclosed after the design project has been completed.
The SSM director hinted last week that the first phase in the island hospital’s development might not be completed by 2017 as previously anticipated, TDM reported.
In a statement, SSM said that the hospital’s initial project has been updated and re-adjusted. Thirty percent more beds will be added, while the number of operating theatres will double. The number of beds in the oncology wing will be increased by over 100 percent.
SSM added that the various departments of the hospital and the quality of services will be reinforced through these developments, which might pose new technical challenges to the construction works.
This adds complexity to the project design and planned infrastructures, leading, for instance, to readjustments to the location of different health departments within the hospital.  Therefore, the construction deadline will most likely be extended.
The growth in the number of Macau residents and a greater influx of tourists has led the government to adjust its initial plan for the new hospital complex.
SSM director Lei Chin Ion told Radio Macau last week that the government would try to complete the hospital’s construction works by 2017, but they “might need some time to make adjustments.” “We need to wait for the completion of the project’s plan in August and then we will have an accurate date,” he added.
The hospital complex will be located east of Estrada do Istmo in Cotai, between the Seac Pai Van Reservoir and the Macau Dome. CP

Two physicians were convicted of negligence in a case that occurred at the Kiang Wu hospital in 2002. The Second Instance Court ruled that the doctors made a serious diagnostic error when attending to a two-year-old infant who was brought to the hospital by its parents after reports of feeling unwell. The parents opted to seek treatment in Hong Kong after the child’s medical situation failed to improve.
The two doctors had been partially acquitted by the Court of First Instance, but the appeal court ruled that, in not undertaking the correct diagnosis, the doctors failed to provide the appropriate treatment.
The doctors were sentenced to pay a compensation of over MOP67,000 to the family and MOP150,000 for personal injuries inflicted on the child.