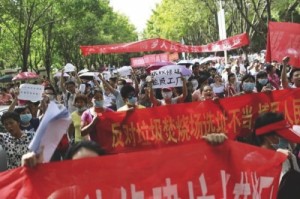 Officials in a southern Chinese town where a proposed garbage incinerator drew thousands of protesters over the weekend say no firm plans have been made for the plant’s location and that a public hearing will be held on the issue.
Hundreds of people marched against the project in Bulou county in southern Guangdong province Sunday, a day after 10,000 to 20,000 protesters came out to denounce the plan, according to three residents who spoke to The Associated Press by telephone.
Such public protests are usually prohibited in China, but the growing number of environmental demonstrations across the country reflect growing public concern over the hazards of industrial projects.
The Bulou county government announced late Sunday that local party and government officials met with 30 resident representatives earlier that day and assured them that the location of the incinerator project had not been finalized and that the public would be invited to a meeting about the plan. The county said officials also warned residents that people harboring “ulterior motives,” organizing illegal gatherings and spreading rumors online would be severely punished.
The three residents said 3,000 to 4,000 people marched through the town of Luoyang Sunday morning as police in anti-riot gear blocked traffic. The residents gave only their surnames, Chen, Huang and Wang, out of fear of being punished by authorities.
Huang said protesters held banners and chanted slogans, including “Protect our homeland” and “Drive out the garbage incinerator.”
Police said in a statement late Saturday that a handful of people were suspected of illegally gathering crowds to disturb social order and traffic and that they had taken away 24 people for investigation.
Local officials are still conducting survey and evaluation work on the project’s environmental implications and geological conditions, the official Xinhua News Agency reported Sunday night.
Environmental protests are on the rise in China, with the public becoming increasingly critical of the fouling of the country’s air, soil and waterways by decades of breakneck development. In May, protesters in the central Chinese city of Wenzhou also took to the streets to oppose a proposed waste incinerator, prompting officials to suspend the project. Jack Chang, Beijing, AP