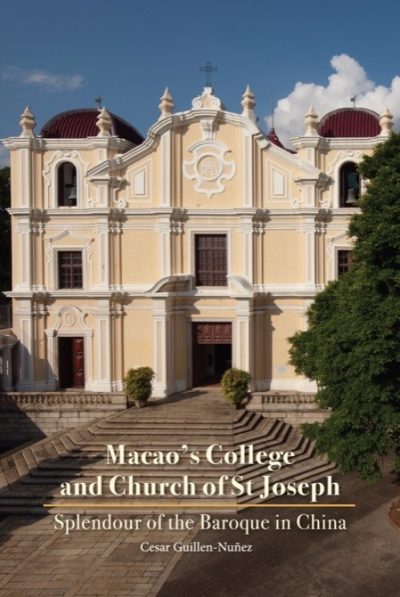 The Cultural Affairs Bureau (IC) has published a book by art historian and Macau Ricci Institute researcher Cesar Guillen-Nunez, titled “Macao’s College and Church of St Joseph: Splendor of the Baroque in China”.

The book focuses on the church and the adjacent Jesuit College – now more commonly known as St Joseph’s Seminary – which was perhaps the most important 18th-century complex of the early days of the Society of Jesus in China, and among the most prominent in Macau.
The buildings are part of UNESCO’s List of Cultural Heritage and are part of the group of four main churches built by the Jesuits in China during the Qing Dynasty. The structures were conceived and built when the Baroque art style and architecture were already in decline in Europe, but were flourishing in the areas controlled by both the Spanish in Latin America and the Portuguese in Macau, respectively.
Guillen-Nunez’s book is divided into two central sections. The first presents a historical perspective that analyzes the period  and the influence of the Jesuit missionaries in China on French intellectuals and other thinkers such as Leibniz. The second section focuses on the iconography of St Joseph and the architecture of the seminary, examining not only the architectural projects but also the interior decoration and religious art displayed in the building.

The author – who is passionate about baroque art and architecture from Spain, Portugal and Latin America – has studied numerous buildings and works of art from the 17th and 18th century across Europe and the Americas. His research led him to study Portuguese colonial art in Macau and Southeast Asia, as well as the Jesuits’ role in the cultural exchange between China and the West in the Society of Jesus’s early days.

The book is priced at MOP180 and is available at several bookshops across Macau, as well as at the Public Information Centers and the Archives of Macao.