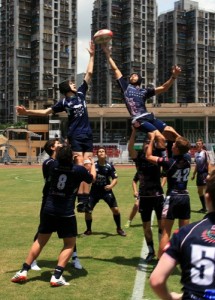 The Macau junior rugby season is set to kick off this coming weekend. According to a press release issued by the Macau Bats Rugby Club, there are some significant changes from last season. Following surging demand, the Macau Bats are introducing a new U10 team, plus a schedule for Hong Kong clubs to come to Macau and play the Bats here.
The club promoters say that the creation of the U10 rugby team follows “two years of rapidly growing interest among the city’s youngest local players. Now into their third year, these players have already started training for contact rugby, and are showing great enthusiasm for the physical version of the game.”
The Macau Bats Rugby Club is also expecting continuing interest from its youngest players, as more expats relocate to Macau. However, the club faces a challenge with older players: expat parents are increasingly sending their children overseas for their secondary education. In response to this, the Macau Bats Rugby Club is trying to raise awareness about the sport among the local Chinese community.
The other major change this season is five dates for Hong Kong junior rugby clubs to visit Macau – up from just one last season. The first visit will be from Sandy Bay RFC, on Saturday 18 October. However, according to the club, local authorities have been reluctant to provide the club with access to a proper pitch. As such, “visiting Hong Kong teams will have to play on sub-size, and sub-standard rugby pitches in Macau.”
Nevertheless, club president Simon Carrington remains upbeat: “Previous visits by Hong Kong clubs have proved highly popular. By increasing the number of visiting clubs to five this season, we expect to end up playing competitive rugby every other weekend. There is absolutely no substitute for that,” he says.
Anyone interested in joining the club should email macaubats@yahoo.com.