How high-level officials are taken down

The investigation into China’s former security chief Zhou Yongkang could pave the way for him to stand trial as the most senior politician ever prosecuted for graft. It’s hard to predict how his case will be handled in the opaque, secretive world of Chinese politics, but here’s how such prosecutions tend to play out, though not necessarily always in this sequence: 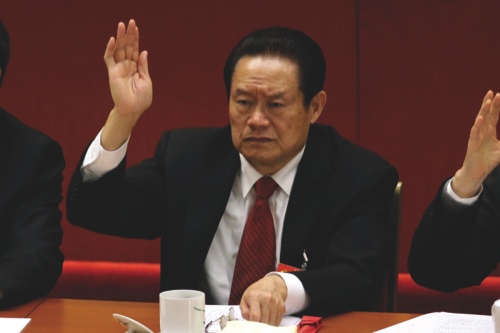 The first hints of trouble in past cases have been the disappearances of the politician’s associates. In the months before Tuesday’s announcement of the probe into Zhou, his known allies in his various spheres of influence were rounded up, one after another, in spectacular fashion. They included bigwigs in the southwestern province of Sichuan where he was party boss for a time and senior executives at the state oil company where he was once general manager — and his son. Investigations of peripheral players usually build evidence of bribery that is then used against the main target, who is often seen as being singled out over political rivalries as much as for corruption. Relatives — and mistresses — of the officials often also disappear.

The party’s anti-graft commission initiates most corruption investigations, using a secretive internal detention system in which suspects are interrogated without access to lawyers or family. Some are done quietly at first, with an announcement being made only after investigators have dug up sufficient evidence. A former top army general, Xu Caihou, had been under investigation since March but his case was announced only last month. In theory, the anti-graft commission reports its findings to China’s Politburo for discussion on how to proceed. However, decisions on high-profile politicians are widely perceived to be the result of tough backroom wrangling among major power brokers. Chinese President Xi Jinping would have had to overcome resistance within the party to publicize an investigation into someone as high-ranking as Zhou, which breaks with a long-standing taboo against targeting topmost leaders. 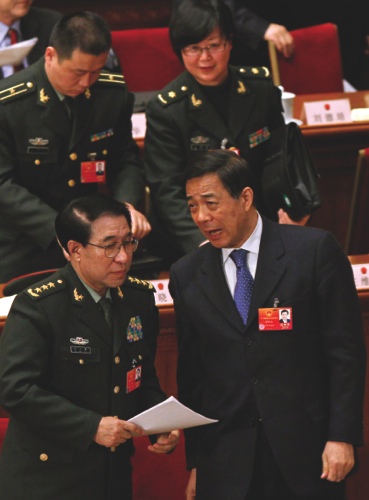 DISMISSAL FROM POSTS, EXPULSION FROM PARTY

Accused officials are usually stripped of party, government and legislative posts that give them immunity from prosecution as well as party membership, reducing them to the status of an ordinary person. The sequence of these dismissals can vary. Bo Xilai, the once-rising political star whose wife murdered a British business associate and who was himself accused of rampant bribe-taking, was first fired from his post as party chief of the megacity of Chongqing, with no reason given. It was only one month later, in April 2012, that the party said Bo was stripped of posts on the powerful Politburo and Central Committee and was being investigated. The party usually uses such occasions to publicize tantalizing accusations of immoral sexual conduct on top of egregious graft. Bo was accused of “improper sexual relations with multiple women.” Bo was a Zhou ally who was widely believed to be aiming for a seat in the party’s ruling inner circle. In the party’s announcement of the Zhou probe, it left out the customary Communist Party honorific of “comrade” — a hint that he’s highly likely to be expelled from the party.

Party investigators hand the case to prosecutors who conduct their own criminal investigation. An indictment is made usually with a formal announcement of an arrest. In reality, the official often has been in the custody of the party or other authority in the preceding weeks or months — or in the case of ex-Beijing mayor Chen Xitong, almost three years. Indictments lead to court trials, which are widely believed to be stage-managed according to negotiations between top officials and the politician taking the stand. The government says the trials are open, but they’re effectively closed to the public because authorities hand-pick the people to fill courtroom seats. The trials typically seem tightly orchestrated, often lasting less than two days despite seemingly complex charges. A former railways minister, faced with massive bribery charges, stood trial for three and a half hours before being sentenced to death with a two-year reprieve. Bo Xilai’s trial was a surprising exception, stretching over five days, with his own testimony plus salacious details of a love triangle involving his wife and an ex-top aide available for public view through a regularly updated court blog. Though still regarded as the victim of a political struggle, Bo was widely seen as having had his day in court. The Chinese public might expect similarly lively proceedings in Zhou’s case. AP