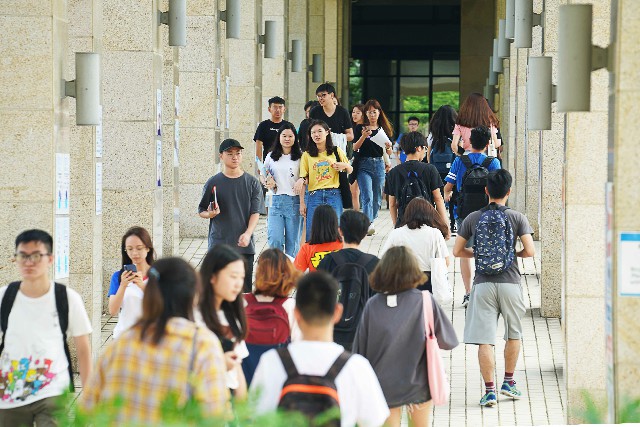 Macau students admitted to local universities and institutes recorded a decline of 6.8% in the 2018/19 academic year when compared to the intake a year earlier, according to the latest data provided by the Higher Education Bureau (DSES).
In a reply to the Times, the DSES stated, “in the past three academic years, the statistic has actually showed a decrease in the number of local students enrolled in higher education institutions in Macau, from 4,626 in the academic year of 2016/17 to 4,312 in the year of 2018/19.”
According to data provided by the bureau, there were a total number of 6,145 locals enrolled in higher institutions as first year students in the 2012/13 academic year. This implies that the number local students at Macau universities has dropped nearly 30% in the past six years.
The DSES also said that about half of all students of local higher education institutions during the 2018/19 academic year were from mainland China.
As of January 2019, there were a total of 1,138 high school graduating students that have applied to universities in China under a joint education scheme between the SAR and the mainland.
As reported by the Times last month, the number of Hong Kong and Macau students studying in Taiwan has also been decreasing over the past four years. Taiwanese universities are calling on their government to loosen restrictions on enrollment quotas for students hailing from the Hong Kong and Macau.
Earlier this year the rector of the University of Saint Joseph, Peter Stilwell, once again expressed his hopes of obtaining the Chinese government’s approval to allow the institution to recruit mainland students. Approval has still not been granted to the university.
The Times contacted different universities and institutions to enquire whether they have maintained a similar number of freshmen enrollment every year.
According to the Macao Polytechnic Institute, it received close to 1,000 freshmen students this academic year – 85% of which are local.
“The number of local students is being maintained at a steady level at Macao Polytechnic Institute,” it stated.

UM sees record high applications
Meanwhile, as the next university academic year begins, the University of Macau (UM) has seen a record high of 13,000 applications for its undergraduate program, recording a nearly a 30% increase from last year.
Although it did not state how many local students were admitted this academic year, UM noted that 348 outstanding local students were admitted this year through the Principals’ Recommended Admission Scheme.
This year, a total of 570 students from 31 countries and regions applied to UM, with an increase in both the number of applicants and the number of countries. Among them, 24 are top students from Chinese Independent High Schools in Malaysia.
Meanwhile, 351 mainland students admitted by UM scored an average of 18.6% higher than the admission marks required by tier-one universities in their respective provinces and cities. The number of applicants from the nine cities in Guangdong province, which is part of the Greater Bay Area (GBA), increased 46% from last year.
In the SAR during the 2018/2019 academic year, 49.3% of all the 34,279 students in the city’s universities and institutions were from mainland China.
According to the DSES data, only 41.6% (10,355) of last year’s freshmen were from Macau.
Last year, it was the Macau University of Science and Technology (MUST) that had the highest number of mainland students, with 86% of its 11,305 students from mainland China.
The Times also contacted City University of Macau, the Institute for Tourism Studies, and the University of Saint Joseph to enquire about the number of freshmen for the 2019/20 academic year, and whether or not such data recorded an increase compared to the previous years. However, no reply was given by press time.