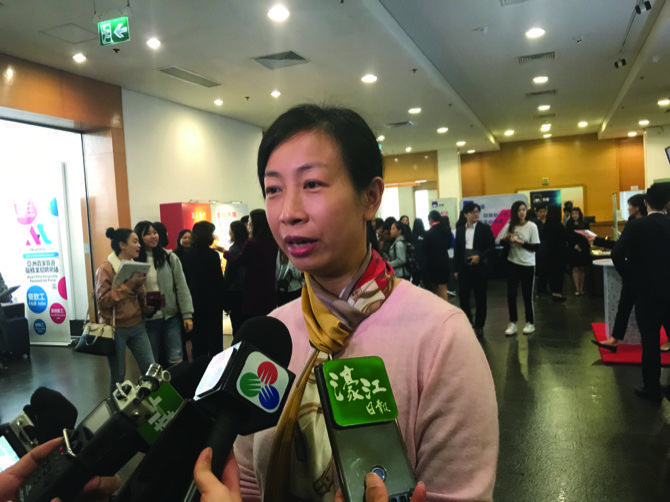 The Institute for Tourism Studies (IFT) is striving to raise the interest of local students in furthering their careers in  Guangdong’s Greater Bay Area (GBA) cities, according to Fanny Vong, president of the education institution.

Yesterday, IFT held its Career Day 2019. During the event, 52 participating organizations from Macau and four companies from mainland China (the GBA and Chengdu) showcased over 2,500 job vacancies to IFT graduating students.

“There have been always companies from the Greater Bay Area attending the fair. This year, the number increased,” revealed Vong.

According to IFT statistics, 2.5 percent of last year’s IFT graduates went to work in the Greater Bay Area.

Questioned by the Times, Vong said that some of the mainland students currently enrolled in university have already traveled across the border in pursuit of career development.

Regarding Macau students, in particular their willingness to relocate to Greater Bay Area, Vong noted that “we have been, together with several higher education institutes and the government, pushing it forward, hoping that Macau students will learn more about the Greater Bay.”

Vong told the Times that the institute will continue to enhance its cooperation with universities in the Greater Bay Area.

IFT hopes that students will develop a further interest in working or launching entrepreneurship projects in the Greater Bay after Sun Yat-Sen University organizes a series of promotional campaigns.

According to Vong, IFT students have always taken internships in Greater Bay Area cities, such as Shenzhen, Guangzhou, and Zhuhai.

Interviewed by the Times, an IFT student surnamed Wang, who is from mainland China and currently in his fourth year majoring in tourism, retail and marketing management, attended the fair in order to look for a job in Macau.

“Our lecturer told us that it [the Greater Bay Area] is like the future heart of the world, […] if there is an opportunity for me, I will take it,” Wang told the Times.

Kate Kwan, a Macau local, who is majoring in tourism business management, told the Times that “there are many opportunities in the Greater Bay Area and mainland China. Sometimes, they [the opportunities] are better than Macau’s.” Kwan also highlighted that she is more interested in opportunities rather than salaries.

A graduates’ employment survey was conducted among 2017/18 graduates six months after they graduated from IFT. According to the survey results, 75 percent of the employed graduates were working in the tourism and hospitality sector with a median salary of MOP15,300.