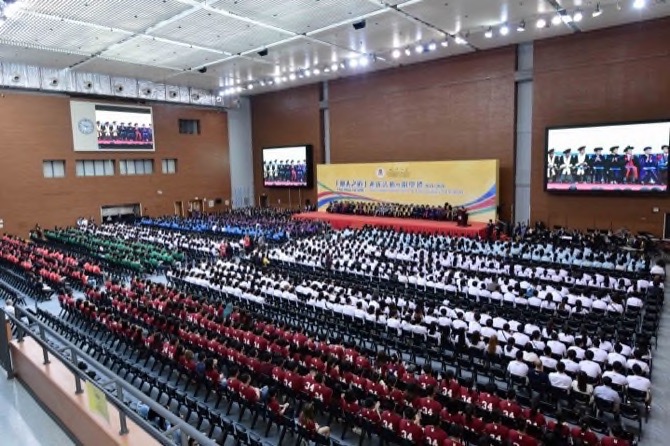 The University of Macau (UM) yesterday held the convocation and an orientation seminar for the 2019/2020 academic year to welcome 3,000 new students as well as faculty members.

The convocation opened with a performance by the UM Symphonic Band. Prior to the convocation, the UM held a flag-raising ceremony, which was attended by about 2,000 UM students, faculty, and staff.

UM Rector Yonghua Song gave the new students their first lecture at the UM. During the talk, Song said that higher education had experienced great changes in the 21st century. He encouraged the students to devote themselves to study in order to become “innovative individuals” with a love for their country, a global mindset, international competitiveness, and a sense of mission to society and to themselves.

Song said that to cope with the demand of the international society for high-calibre professionals, the UM has also incorporated innovation in its undergraduate education by increasing the number of courses in digital education, civic participation and social experience, entrepreneurship, and leadership, in an effort to boost students’ international competitiveness.

Classes in the new academic year will start next Monday. To help familiarize new students with the campus and adapt to a new chapter in their lives, the UM has been organizing a series of “The Way to UM” orientation activities since the beginning of this month, which include lectures by faculty deans and residential college masters.

An information session for parents was also held to help parents learn more about UM’s philosophy of education and latest developments. DB