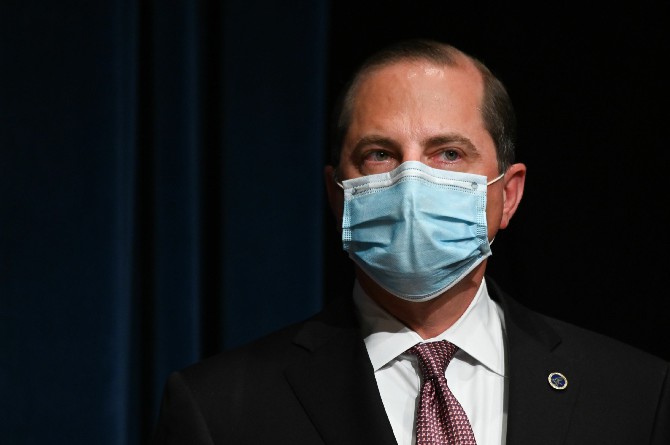 Health and Human Services Secretary Alex Azar will lead a delegation to Taiwan in the highest-level visit by a U.S. cabinet official since Washington cut ties with Taipei more than 40 years ago.
Azar is scheduled to arrive in Taiwan “in the coming days” to discuss the global response to the Covid-19 pandemic, as well as supplies of medical equipment and technology, according to a statement yesterday from the Department of Health and Human Services. Azar said he would underscore “our shared belief that free and democratic societies are the best model for protecting and promoting health,” according to the statement.
The announcement drew a rebuke from China, which said that it remained “firmly opposed” to official interactions between the U.S. and Taiwan. Beijing had “lodged stern representations” to U.S. officials, Foreign Ministry spokesman Wang Wenbin told a daily briefing, calling Taiwan “the most important and sensitive issue in China-U.S. relations.”
“The ‘one-China’ principle is recognized by the international community,” Wang said in Beijing, referring to the discussions that underpinned the U.S. move to establish relations with Beijing in 1979. “Attempts that disregard, deny or challenge this principle will end up in failure.”
Taiwanese President Tsai Ing-wen said on Twitter she looked forward to welcoming Azar and “sharing how the #TaiwanModel works to contain the spread of #COVID19 & contribute to global health.”
The visit is the latest signal of U.S. support for Taiwan in the face of an increasingly assertive leadership in Beijing. Officials in Taipei have raised concerns that China may attempt to accelerate its plans to gain control over Taiwan after imposing a national security law in Hong Kong that is being used to clamp down on democracy advocates. Taiwan’s defense ministry reported a sharp increase in the number of Chinese military incursions into the island’s air defense identification zone in June.
As tensions between the U.S. and China have heightened over issues such as trade and the rise of Chinese technology companies in the past two years, President Donald Trump’s administration has indicated its support for Taiwan. In recent months it’s approved a possible $620 million deal to supply missile parts and backed an ultimately unsuccessful bid to have the island participate in this year’s World Health Assembly.
China opposes Taiwan’s involvement in any organizations for which statehood is a prerequisite as it views the island as part of its territory, a claim Taipei rejects. President Xi Jinping’s government slapped sanctions on Lockheed Martin Corp. in July after the latest approval of weapons sales under Trump’s administration, which has included billions of dollars’ worth of F-16 fighter jets, tanks, and Stinger missiles.
Azar’s trip is the first cabinet-level visit to Taiwan in six years, since then-Environmental Protection Agency Administrator Gina McCarthy gave a speech in Taipei in 2014. The U.S. health secretary ranks higher in the presidential line of succession than previous official visitors to the island.
“Azar’s visit is a breakthrough not only because he is a high-level U.S. official, but it may pave the way for Taiwan and U.S. to cooperate further as Taiwan excels at virus containment,” said Doong SyChi, vice president of the Taipei-based Taiwan Thinktank. “That’s an area where the U.S. can’t work together with China. It’s justified for Taiwan and the U.S. to discuss virus containment and related topics, and both sides can push back against China’s protest.”
Hailing Azar as a “friend of Taiwan,” the foreign ministry in Taipei said Wednesday he would meet with Tsai during the trip. The visit “proves that mutual trust between the two sides is on a solid footing and communication is smooth,” according to a statement from the ministry.
The trip comes comes after increasing criticism of Azar’s role in the U.S. response to the coronavirus. Azar was replaced in March by Vice President Mike Pence as leader of the government’s task force to combat the pandemic after repeated questions about health agencies’ performance.
Azar and his delegation will be under strict controls during the visit to prevent them from accidentally importing the virus, according to Taiwan foreign ministry spokeswoman Joanne Ou. They will need to test negative for Covid-19 before departure, and be tested again when arriving at Taiwan’s airport via a charter flight, she said.
They will also undergo mandatory daily temperature checks in Taiwan, wear face masks at all times and maintain social distancing, she said. They will take chartered vehicles when commuting and avoid close contact with the public. MDT/Bloomberg