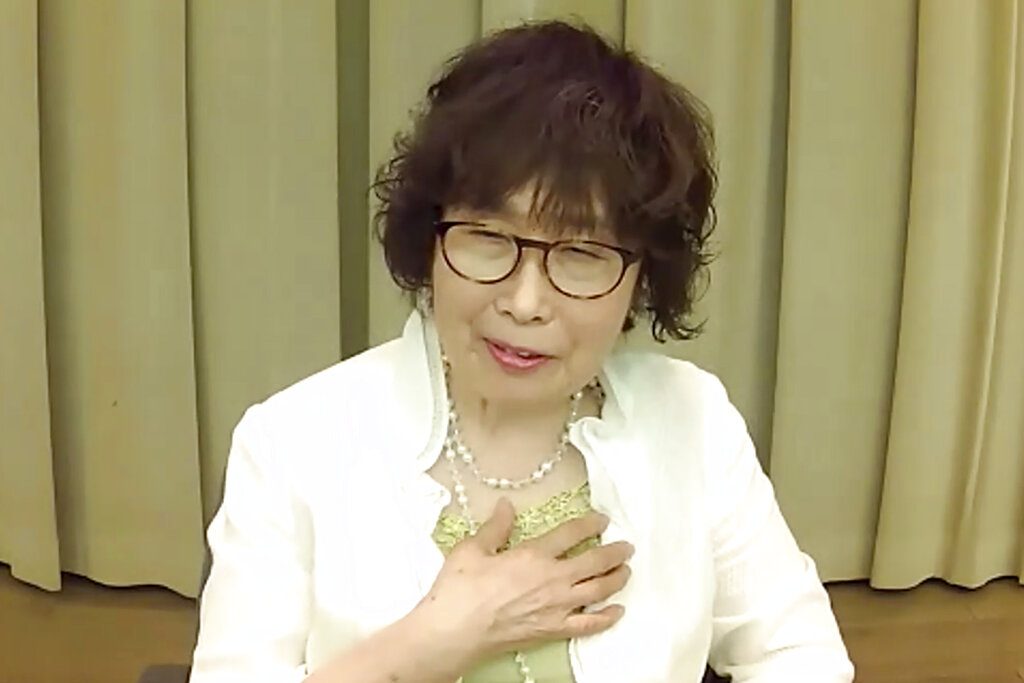 In this image made from video released by Foreign Correspondents’ Club of Japan, Keiko Ogura, an atomic bombing survivor, speaks during a video press conference from Hiroshima, last month

HIROSHIMA — The atomic bomb that exploded over Hiroshima 75 years ago didn’t just kill and maim.
The survivors have also lived for decades with lingering shame, anger and fear. Many in Japan believed radiation sickness is infectious or hereditary.
Some hid their status as survivors. Some harbored thoughts of revenge in their hearts. Some watched as loved ones died, one by one, because of radiation from the bombing, and wondered — Am I next?
As they grow old — their average age now exceeds 83 — many now feel an extreme urgency. They are desperate to rid the world of nuclear bombs and share with the young the first-hand horror they witnessed on Aug. 6, 1945.
Here are some of the stories of survivors interviewed by The Associated Press.

KEIKO OGURA, 84
Remembering the atomic bombing and how she survived is painful, but Keiko Ogura is determined to keep telling her stories as she organizes English guided tours for foreign visitors at Hiroshima’s Peace Memorial Park.
Ogura established Hiroshima Interpreters for Peace in 1984 to translate survivors’ stories, including her own.
“In the beginning, it was really painful to remember those days,” she said at a recent online briefing. “But I wanted young Americans to know what their country had done. I have no intention to blame them, but just want them to know the facts, and think.”
It was 40 years after the war before she felt comfortable telling her stories.
“What we suffered the most was a sense of guilt as we kept wondering why we could not save the many people who died before our eyes.”
But now she has also found solace by telling her story.
Visitors are scarce this year because of the coronavirus pandemic. Still, she will organize a live virtual tour of the peace memorial on the anniversary of the bombing Thursday.

KOKO KONDO, 75
Koko Kondo had a secret mission as a girl: Revenge.
She was determined to find the person who dropped the atomic bomb on Hiroshima, the person that caused the suffering and the terrible burns she saw on the faces of girls at her father’s church — and then square off and give them a punch.
She got her chance in 1955.
Ten-year-old Kondo appeared on an American TV show called “This is Your Life” that was featuring her father, Rev. Kiyoshi Tanimoto, one of six survivors profiled in John Hersey’s book “Hiroshima.”
Kondo stared in hatred at another guest: Capt. Robert Lewis, co-pilot of the B-29 bomber Enola Gay that dropped the bomb.
While Kondo, who survived the bombing as an infant, was wondering if she would act on her fantasy and punch him, the host asked Lewis how he felt after dropping the bomb.
“Looking down from thousands of feet over Hiroshima, all I could think of was, ‘God, what have we done?'” he said.
Kondo saw tears well in Lewis’ eyes, and her hatred melted away.
“He was not a monster; he was just another human being. … I knew that I should hate the war, not him,” Kondo told The Associated Press. She said she was grateful she met Lewis because it helped the hate go away.
Still, she suffered years of humiliation and prejudice that she had to overcome as she grew up. One day as an adolescent she was told to undress except for her underwear at a medical conference in an auditorium. Her fiance rejected her because she was an atomic bomb survivor.
On the eve of Thursday’s memorial at the cenotaph of Hiroshima Peace Park, Kondo held a moment of silence and prayed for the victims, and for Lewis. That meeting changed her way of thinking and helped her overcome the difficulties later in her life, she said.
Now, Kondo is following in her father’s footsteps, busy telling her stories to younger people.
Hiroshima has become a beautiful place, but atomic bombs still exist, she says, and another nuclear attack would destroy the world.
“It’s time we human beings get together and abolish nuclear weapons,” she said. “We have hope.”

LEE JONG-KEUN, 92
Lee kept his secret as an atomic bombing survivor for nearly 70 years, not even telling his wife, always fearing people might notice the burn marks on the face.
But today Lee, a second-generation Korean born in Japan, is training young people to tell survivors’ stories. He also wants them to learn about the difficulty that Koreans have faced in Japan.
“Survivors won’t be here 20 years from now, but our stories must be,” said Lee, who will meet Prime Minister Shinzo Abe after Thursday’s memorial to demand Japan do more to ban nuclear weapons.
Some 20,000 ethnic Korean residents of Hiroshima are believed to have died in the nuclear attack. The city had a large number of Korean workers, including those forced to work without pay at mines and factories under Japan’s 1910-1945 colonization of the Korean Peninsula.
At a memorial Wednesday for Korean victims, Lee laid flowers and prayed for those who perished. “I ask younger people to never forget us and to understand the tragedy, absurdity and cruelty of the war so that nuclear weapons will be eliminated from the world as soon as possible.”
On the morning of Aug. 6, 1945, 16-year-old Lee watched the blue summer sky turned yellowish orange. He suffered burns on his face and neck that took four months to heal.
When he returned to work, co-workers stayed away, saying he had “A-bomb disease.” He decided not to tell anyone about the atomic bombing. That would only “double” his suffering when he was trying hard to hide his Korean identity.
His parents talked in Korean and wanted him to learn the language, but he didn’t like going outside with them, fearing people would notice their Korean accent.
So Lee lived under a Japanese name, Masaichi Egawa, until eight years ago when he began speaking out.
“To tell my story, I had to explain why Koreans are in Japan,” he said. “Now I have nothing to hide.”

MICHIKO KODAMA, 82
The external scars from the atomic bombing have faded, but Michiko Kodama says her heart hasn’t healed.
(asterisk)For me the war isn’t over,” Kodama said in an interview. “Even 75 years later, we continue to suffer because of radiation. … And nuclear weapons still exist.”
On Aug. 6, 75 years ago, the 7-year-old Kodama saw a flash in the sky from her elementary school classroom. Shards of broken glasses rained down on her. On the way home, her left shoulder bleeding as her father carried her on his back, she saw a girl, badly injured, looking up at her. Even today she is pained by the girl’s face.
She lost her favorite cousins within weeks of the bombing, then her parents, brothers and even her daughter. All died of cancer or from the radiation exposure. Kodama has lived in fear that she would be next.
There were also years of discrimination and humiliation.
One day, when she went to a clinic and showed her medical certificate, a receptionist noted her status as a bombing survivor out loud, and another patient sitting next to Kodama moved away. “I still feel hurt from the discrimination; that is what sits the heaviest in my heart” she said.
MDT/AP