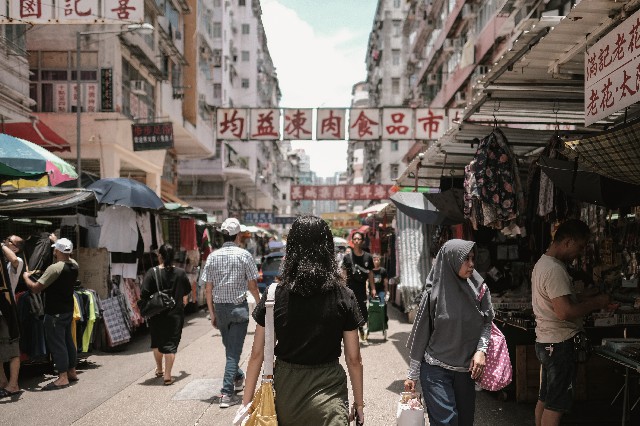 Hong Kong is counting the economic cost of almost six months of political unrest, with the city expected to post its first budget deficit since the early 2000s.
Financial Secretary Paul Chan made the announcement to lawmakers Monday, explaining that the ongoing turmoil has hurt economic growth by some 2 percentage points this year.
There’s more bad news coming: Retail sales data for October are expected to show a “very enormous” decline, Chan said. Arrivals from China plunged 45.9% from a year earlier in October, the biggest decline on record, meaning that the annual “Golden Week” holiday in mainland China failed to translate into a tourist bump for local retailers. Overall, visitors to Hong Kong fell almost 44% in the month.
For retail businesses, that raises the stakes for coming months. Many proprietors will have to make hard choices: whether to continue the fight into next year or give up as leases come up for renewal and employee bonuses must be paid.
Iris Pang, an economist with ING Bank NV in Hong Kong, sees a 70% chance of a wave of store closures among retailers if spending continues to be weak. The situation is especially dire for catering companies, who typically enjoy brisk business at the holidays though face the prospect of cancellations during periods of unrest.
“Make or break is the correct description for most catering businesses in Hong Kong as some of them have continued in the business just because their rental agreement has yet to be due,” Pang said. “It is very likely that many catering businesses will close their business if their revenue doesn’t make a comeback during this holiday.”
Cosmetics retailer Sa Sa International Holdings Ltd. may close about 30 stores in the coming year depending on how the market shakes out and “the results of discussions with the owners on rent reduction,” the company said in an emailed statement. Sa Sa shares have tumbled more than 40% this year.
Chow Tai Fook Jewellery Group Ltd. will look to cut costs by seeking bigger rent discounts, reducing advertising and reviewing store networks in Hong Kong and Macau, the company said in a webcast after reporting that first-half net income sank 21%. The company has leases at more than 40 stores in Hong Kong and Macau expiring in the next fiscal year.
Hong Kong has been one of the world’s largest centers for sales of luxury watches, but it has taken a hammering this year. Swiss watch exports to mainland China surpassed those to Hong Kong for the first time in October.
“If the situation persists, by the end of the year many watch companies will have to shut down business,” said Alain Lam, finance director with Oriental Watch Holdings Ltd. “At the end of the year, suppliers will ask for payment and employees will demand a one-month bonus — this may cut off the cash flow of some companies.”
Oriental Watch Holdings has managed to negotiate 8% to 10% discounts in rent from some landlords and will attempt to arrange better deals as leases come up, Lam said. But there’s no guarantee the company will retain its significant presence in Hong Kong, as it has healthier operations elsewhere.
“If the numbers don’t work out, we will close stores,” he said. “We are shifting our strategic focus to mainland China, aggressively.” Eric Lam, Jinshan Hong & Natalie Lung, Bloomberg