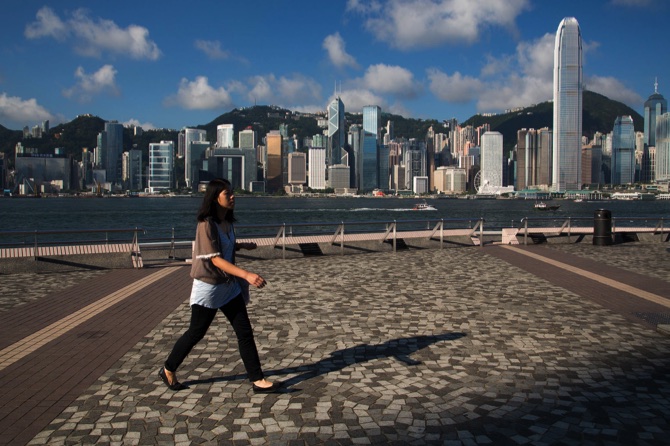 Hong Kong’s secondary property prices rose in the second quarter, marking a pause in a correction that analysts said may resume amid higher supply and weaker demand.
Secondary property prices advanced 1.6 percent in the three months ended June 30, compared with a drop of 4.8 percent in the prior three months, according to figures released Friday by the Rating and Valuation Department. Analysts from Nomura Holdings Inc., CIMB Securities Ltd. and CLSA Ltd. are among those predicting that the rebound would be short-lived.
Home prices in Hong Kong have fallen 11 percent from a peak in September and sales have tumbled, amid slower growth and economic uncertainty. While diminished concerns about a rate hike by the U.S. Federal Reserve and a stock market rebound improved buyer sentiment in the second quarter, there are many headwinds including looming supply, analysts said. The government forecasts that 18,203 new units will be completed this year, part of a pipeline of 93,000 expected in the next three to four years.
“This correction is multi-year, not several quarters,” said Jeffrey Gao, a property analyst at Nomura, who expects prices will need to drop 25 percent to 35 percent from last year’s peak before the market stabilizes. “In the upcoming months sentiment will be better and volume and price could edge up, but it’s not really bottoming out.”
Raymond Cheng, a property analyst at CIMB Securities, said that the overall downward trend remains in place in light of the large expected increase in supply as part of government drive to make housing more affordable.
“In the past two months sentiment has improved because of the equity market and the U.S. didn’t raise rates, but on the fundamental side, especially the supply side, there haven’t been any changes,” Cheng said.
Sellers of existing homes will also have limited pricing power in a market where they have to compete for buyers. Developers including Sun Hung Kai Properties Ltd., Cheung Kong Property Holdings Ltd. and Henderson Land Development Co. are engaging in aggressive marketing techniques offering discounts of as much as 20 percent and mortgage financing of 120 percent.
Ronnie Chan, chairman of Hang Lung Properties Ltd., said the market is entering a phase of “relative stability,” despite nervousness about conditions outside Hong Kong including the rise of terrorism, the pending U.S. election, a slowdown in China and Brexit.
“Looking ahead, I don’t see prices rising sharply, nor do I see prices precipitously dropping,” he said.
Nicole Wong, head of property research at CLSA in Hong Kong, said the second-quarter rebound was driven by people who jumped into the market when prices didn’t plunge as much as they’d expected.
“People expected prices to keep falling and they were wrong, and then they panicked and came back,” said Wong, who projects prices will fall another 3 percent this year, and 7 percent in 2017. “By the third quarter they will think they have been wrong by rushing in, I guarantee you.” Frederik Balfour, Bloomberg