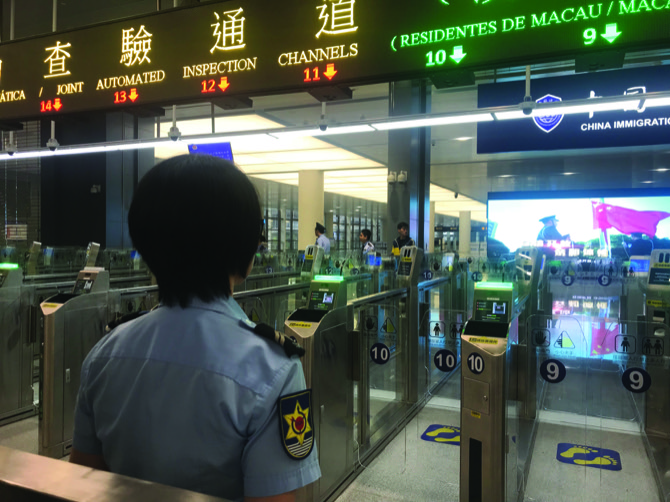 The Macau and Zhuhai sides of the Hong Kong-Zhuhai- Macau Bridge have almost combined the Macau immigration control and mainland China immigration control into one single procedure, as the government authorities on both sides produced a new cooperative method.

Yesterday, at 9 a.m., the bridge officially opened to the public. The government led a group of journalists who visited the HKZMB Macau port before 9 a.m.

This original style of passport control caused several people to forget to pass their travel document to the next immigration control officers, whether mainland or Macau, depending on whether these passengers are coming to or leaving Macau.

It takes approximately one minute, and less in most cases, for a person to cross from Macau territory to Zhuhai territory.

A man surnamed Cheng was the very first to enter the Macau Port. He was also the first arriving at the manual checkpoints. Cheng asked for a day off from his work to attend the HKZMB opening. 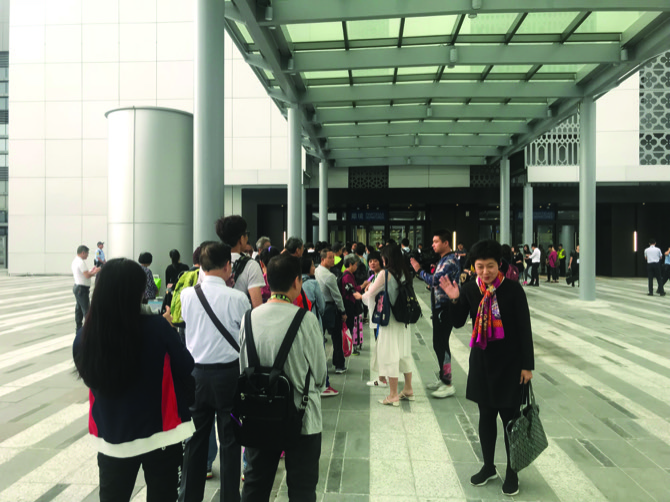 Queue prior to the opening of the bridge

“[We] need only one document to cross the two borders. This should be the first time in the world. I want to see how fast it is,” said Cheng, remarking that “locals still need to line up in order to cross both borders. However, now the immigration checking can be done simultaneously.”

When expressing his opinions regarding the instructions, Cheng said that they “could be a bit clearer. Had I not been here last night, I would have entered [at] the wrong entrance,” admitted Cheng.

Regarding the bus experience, one of the passengers onboard the first bus from Hong Kong to Macau, who was surnamed Ren and a Shenzhen resident, paid a visit to Hong Kong particularly in order to be one of the first tourists to use the HKZMB.

“I felt that it [the bridge] was shocking and that […] our country is really strong,” said Ren.

The Shenzhen resident said he, in the future, would choose to travel to Macau from Hong Kong by bus rather than by ferry.

According to the driver of the first Hong Kong-Macau shuttle bus, driving on the HKZMB is no different from driving elsewhere. However, the driver said that the view along the bridge is “very pretty.”

According to statistics provided by representatives of the Public Security Police Force (PSP), the Macau Customs Services, and the HKZMB Macau port management bureau, as of 4 p.m. yesterday, 8,619 crossings were recorded at the HKZMB Macau port. More than 7,000 of these crossings were made between Hong Kong and Macau, while the rest took place between Zhuhai and Macau.

Connection to Shenzhen would be good for Macau, Ho says

THE CHAIRMAN of the Legislative Assembly, Ho Iat Seng, believes that “it would definitely be a good thing for Macau” if the Hong Kong-Zhuhai-Macau Bridge (HKZMB) had another branch connecting to Shenzhen.  According to a report by Macao Daily News, Ho said that the HKZMB means “Macau has one more backyard garden,” as people can now enter Hong Kong by the bridge. When commenting on the HKZMB, Ho further considered that “it is unreasonable to just talk about the investment and traffic flow, it should be the overall benefit.”