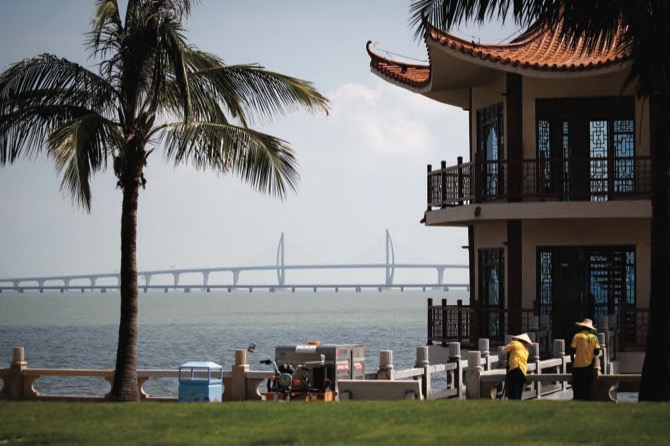 The mayor of Zhuhai, Yao Yisheng, said that the Hong Kong-Zhuhai-Macau Bridge (HKZMB) is far from enough in terms of its effect on Zhuhai, according to the Chinese press.

During yesterday’s press conference for Guangdong province’s National People’s Congress, Yao remarked that at present, he clearly realizes that the HKZMB is only a bridge, and although the bridge has attracted lots of attention, its effect on Zhuhai is still far from enough.

In addition, Yao noted that in the future, Zhuhai will cooperate with Macau on education and healthcare projects. The city will work with universities in Hong Kong and Macau to seek breakthroughs on various projects, according to Chinese reports.

The mayor of Zhuhai also remarked that considerations of Macau were included in the development of Hengqin.

According to Yao, one of the three key aims of the Hengqin development is to “preserve good mountains and good water” on undeveloped lands.

Zhuhai will also research and prepare to launch affiliated measures for the Macau and Guangdong cooperative industrial zone, including ways to attract Macau companies to enter the industrial zone of Hengqin.

Moreover, Yao hopes to gain the central government’s approval for a renovation of Hengqin’s reform and management.

Yao also revealed that in 2019, Zhuhai will work with Macau and Hong Kong to launch a HKZMB sightseeing tour, which will include the bridge and sea tourism projects.

According to Yao, regardless of the height and content of the buildings at the cross gate central business district, they must be connected with Macau, and they must promote the diversification of Macau’s industry.