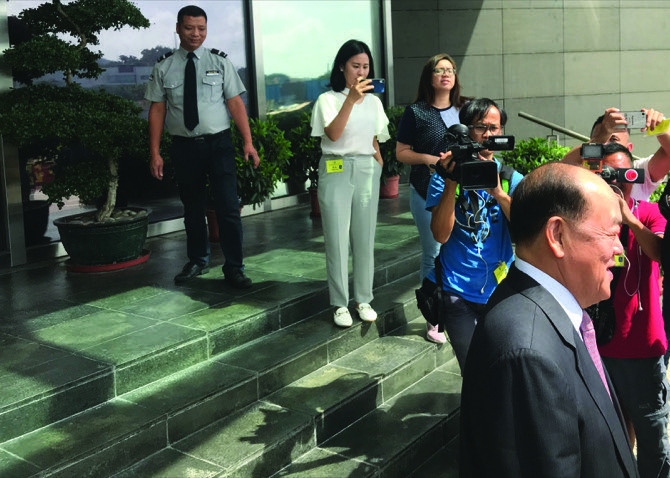 Ho Iat Seng, the favorite to succeed Chui Sai On as Chief Executive, resigned on Friday from his post as lawmaker and president of the Legislative Assembly (AL).

His resignation was not required by the law, which states that he is permitted to wait until after the election. In the meantime, his role would merely be suspended. After the election, and if appointed the new Chief Executive, Ho would be required to resign from his role as a legislator.

On Friday Ho said that a two-month suspension for the AL’s president would not be good for the body. In addition, he said that he “is not looking back.”

After Ho stepped down from the two positions, indirectly-elected lawmaker and current vice president Chui Sai Cheong has stepped forward as acting president, as per the governing regulations of the legislature.

Prior to the start of Friday’s AL plenary meeting, Ho delivered his resignation speech, upon which he departed the legislature. His official resignation was submitted to the AL Executive Committee on June 20.

In his speech, Ho thanked the Macau SAR government, all lawmakers, residents, AL staff, and the media.

“I express my deep appreciation towards the support everybody has given us for so many years while I served as the vice-president and president of AL,” said Ho.

The Chief Executive candidate also made a special appeal to the media: “I am a straightforward kind of person,” he said. “I speak from my heart, so please bear with me if I am too direct.”

Ho was also asked Friday about his likely selection of secretaries, but the candidate refused to answer directly, noting that he was not in a position to make that comment.

He thought all of the current secretaries had performed well in their role, but noted some have skills, like charisma, which make them more popular with the public.

The ex-AL president was also reminded of the civil actions in 2014 when 20,000 people took to the street and 10,000 people surrounded the AL building, protesting the “compensation bill” that would have raised the remuneration for high officials.

Ho recalled that it was his first year as the AL president. To him, it was both a challenge and lesson. The Chief Executive candidate thinks that if the administration works well, citizens will have little casue to take to the streets.

“The better the work of the administration, the easier for the AL,” Ho added on the matter.

Ho was outspoken on several other topics. He commented on the “Civil Protection Bill,” particularly article 25, which concerns rumor spreading and its punishment.

Ho expressed his view that the action should be punishable because spreading rumors in extreme weather conditions, such as during typhoon signal 8 or above, might cause social panic. However, he said if the government is capable in releasing clear information, fraudulent information will not exist.

The ambiguous definition has been raising concerns across society, but the ex-AL president dismissed them: “the prison won’t have enough cells.”

The law states that after the departure of the AL president, a new leader should be chosen within 15 days, and the outstanding seat be filled within 180.

Ho has been part of the AL for a decade. He started as an indirectly- elected lawmaker, before having been elected as the vice president and eventually the president of the body. Staff reporter