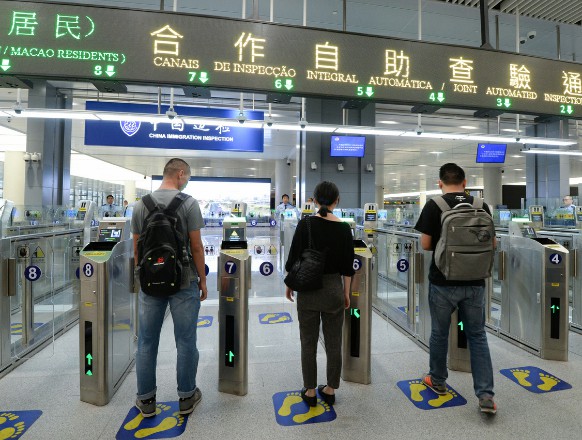 The border control measures currently being enforced by the Macau government in the face of the novel coronavirus outbreak are sufficient and adequate, Chief Executive Ho Iat Seng said yesterday during a special press conference.
Speaking to the media at the government’s headquarters, the Chief Executive said, “We are not closing our borders to anyone, we are not banning anyone, not even the people from Wuhan or Hubei province.”
Instead, the Chief Executive said the government is ascertaining that people entering Macau are not infected with the virus and they have the right documents to certify that they are not infected.
Ho also noted that the complete closure of the Macau borders would severely damage local society.
“We need the borders open for our food supply. All our essential supplies come through there,” he said adding that working staff, such as cleaning and security staff, also need that border open so they can provide essential services in Macau.
When asked by the media whether the decision to stop the circulation of ferry services between Macau and Hong Kong was agreed upon between both sides or was a unilateral decision taken by Hong Kong authorities, Ho admitted that there was no prior negotiation or agreement reached between both sides.
“Honestly, Hong Kong did not discuss with us. We only learned from the news that they decided to close the ferry terminal. We had to discuss it immediately with the ferry operators. They [Hong Kong] do not [usually] discuss with us about anything. Similarly, when we take measures, such as closing the casinos, we also won’t let them know in advance or ask them to tell their people not to come. We can only rely on each other’s news releases,” Ho said.
The Chief Executive reiterated that Macau would not close its borders and so citizens should be calm and confident, reassured that there would be no lack of food or any other essential products.
“I need to reiterate that we will not close the borders. Please do not rush for food and other resources,” added Ho.
The insistence comes as neighboring Hong Kong sealed off most checkpoints with the mainland this week in order to contain the spread of the virus. The new measure leaves only three border checkpoints in operation: Shenzhen Bay port, the Hong Kong-Zhuhai-Macau Bridge and the airport.
Previously several sectors of society, including lawmakers and political and social affairs commentators, had expressed opinions that to effectively contain the spread of the virus in Macau, the government should adopt stringent border control measures that could include a complete ban on all Chinese nationals entering Macau or, at least, the enforcement of a ban on all people arriving from the most affected mainland provinces.