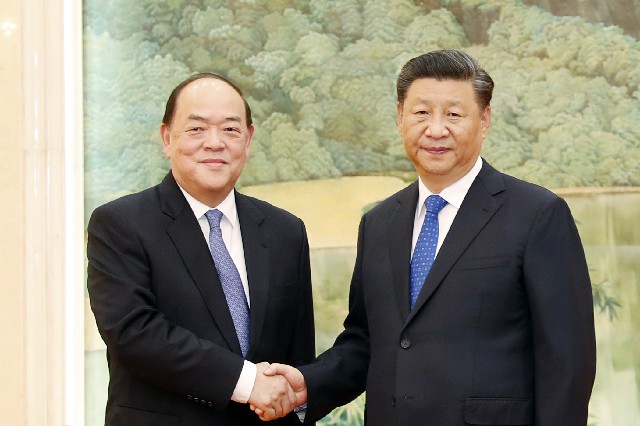 Chief Executive-elect Ho Iat Seng was officially recognized in Beijing as the Chief Executive of the Macau SAR for the fifth term of the job since its inception in 1999. He will become the third Chief Executive of Macau after taking office on December 20, the 20th anniversary of the SAR.
The core of the appointment ceremony yesterday was the handing by Premier Li Keqiang to Ho of the appointment certificate, which is legally known as the Decree No. 719 of the State Council of the People’s Republic of China.
Following his appointment ceremony, a session was held in which President Xi Jinping received the Chief Executive-to-be. The president opened the session by stating the Central Government’s approval in Ho’s contributions in his work at the National People’s Congress Standing Committee and the Macau SAR Legislative Assembly. He has since resigned from both posts, allowing him to become the next Chief Executive.
Xi pointed out that Ho had contributed significantly to the reform, opening-up, and modernization of the country, and the facilitation of prosperity and stability of the SAR. The president instructed Ho to carefully manage Macau as it enters its next chapter.
In between the appointment and the session with the president, the Chief Executive-elect was received by Li Keqiang. During the session, Li stressed that the appointment carries not only the Central Government’s trust in Ho, but also “all Macau residents’ hope for him.”
Both Xi and Li encouraged the Chief Executive-elect to be brave, creative and unifying. They instructed Ho to seriously plan the strategy for Macau’s future development.
In response, Ho emphasized that he understood the weight of the appointment, as it represents the hope place in him by both the Central Government and the people of Macau. He will unyieldingly stand up to the ‘One Country, Two Systems’ principle and vigilantly abide by the Macau Basic Law in his governance.
Meanwhile, incumbent Chief Executive, Chui Sai On, officially congratulated Ho yesterday on the occasion of his official appointment.
Chui issued a statement for the occasion. He started by commending Ho’s contributions made during the latter’s services in various positions at both regional and national levels. “Ho’s commitment and contributions to the country and the Macau SAR were widely recognized,” Chui said, according to the statement.
Chui also congratulated Ho on obtaining 392 votes from a 400-strong election committee, securing the backing of 98% of the electorate. Chui sees this as a sign of the strong support offered by the public.
The current Chief Executive expressed his belief in Ho and his team’s ability to lead Macau into “an even more prosperous chapter of development.”
The period between Ho’s appointment and inauguration, according to Chui, is crucial in the seamless transition of administration. Therefore, the incumbent has instructed the current administration to provide all necessary support to Ho. Anthony Lam