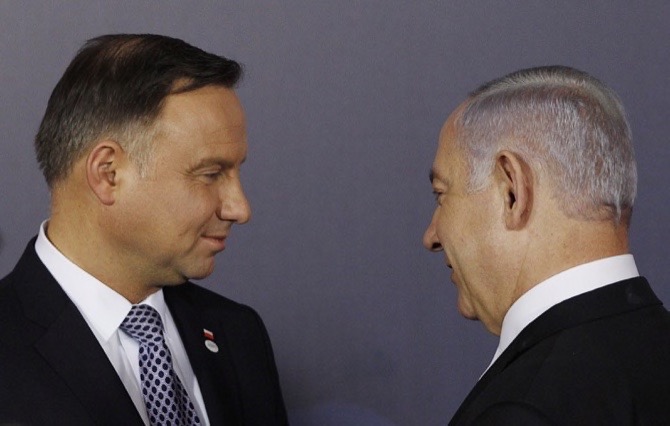 Prime Minister Benjamin Netanyahu’s off-hand comment about Poland and the Holocaust has overshadowed a summit of central European leaders this week in Israel and yesterday Poland pulled out of the gathering in protest.

Poland’s abrupt decision to cancel its participation in the Visegrad conference suddenly cast a pall over the gathering, which Netanyahu has touted as a major milestone in his outreach to emerging democracies in eastern Europe and his broader goal of countering the criticism Israel typically faces in international forums.

The crisis was sparked last week when Netanyahu told reporters that “Poles cooperated with the Nazis.” The seemingly innocuous comment infuriated his Polish hosts, who reject suggestions that their country collaborated with Hitler.

Poland’s prime minister, Mateusz Morawiecki, announced Sunday that he would be skipping this week’s Visegrad summit, a gathering with fellow prime ministers from Hungary, the Czech Republic and Slovakia. Polish Foreign Minister Jacek Czaputowicz was supposed to replace him at today’s meeting in Jerusalem, the first time the gathering is being held outside of Europe.

Lost in the diplomatic uproar was that Netanyahu was actually defending his close alliance with Poland and other eastern European leaders when he made his comments.

Historians and domestic critics have accused Netanyahu of cozying up too tightly to nationalistic leaders who have promoted a distorted image of the Holocaust and turning a blind eye to anti-Semitism associated with them.

Morawiecki himself last year equated Polish perpetrators of the Holocaust to supposed “Jewish perpetrators.” Netanyahu has recently hosted leaders of Lithuania, Ukraine and other countries who have engaged in selective World War II-era commemorations that play down their countries’ culpability while making heroes out of anti-Soviet nationalists involved in the mass killing of Jews.

In response to a question from The Associated Press during his two-day visit to Warsaw, Netanyahu said he raises the issue of historical revisionism with the various leaders. He rejected the notion he was a partner to diminishing anyone’s complicity in the genocide of Jews in World War II.

“I know the history. I don’t starch it and I don’t whitewash it. In Lithuania, in particular, there were some horrible things. No one is concealing that,” said Netanyahu, the son of a historian. “This whole idea that we diminish history — we don’t distort, and we don’t hide, and no one has any interest in that, on the contrary.”

In the same briefing with his travelling press corps, Netanyahu tried to deflect prominent criticism by Israeli historians of the deal he struck with Polish leaders over their country’s controversial Holocaust speech law, which criminalized blaming the Polish nation for crimes committed against Jews during World War II.

Israeli officials saw it as an attempt by Poland to suppress discussion of the well-documented killing of Jews by Poles during and after the wartime German occupation.

“Poles collaborated with the Nazis and I don’t know anyone who was ever sued for such a statement,” Netanyahu told the reporters.

However, some media outlets reported him saying “THE Poles,” which set off an angry rebuke in Warsaw, including a summoning of the Israeli ambassador for clarifications. Netanyahu’s office said he was misquoted and blamed the misunderstanding on an editing error in an Israeli newspaper.

Netanyahu’s office then reiterated that he “spoke of Poles and not the Polish people or the country of Poland.” That only got him in hotter water at home for seemingly catering to the Polish obsession over his wording.

“The prime minister of the Jewish state is selling out the memory of the Holocaust for a dubious alliance with an anti-Semitic leader,” said Tamar Zandberg, leader of the opposition Meretz party.

Nonetheless, the Polish government said it considered Netanyahu’s response insufficient and threatened to withdraw from the conference.

With emotions running high in Poland, Israel’s new acting foreign minister, Israel Katz, went on TV Sunday to reiterate that “Poles collaborated with the Nazis” — even mentioning Poles who “sucked anti-Semitism with their mothers’ milk.”

The summit is expected to go forth this week in Jerusalem even without Poland.

Hungarian Prime Minister Viktor Orban, who is expected to attend, is another leader who has trod into the sensitive terrain of World War II conduct. He has lavished praise on Miklos Horthy, Hungary’s World War II-era ruler, who introduced anti-Semitic laws and collaborated with the Nazis. Orban also has backed a state-funded museum that experts say plays down the role of Hungarian collaborators and also used anti-Semitic imagery in a campaign against the liberal American-Hungarian billionaire George Soros.

When pressed by the AP, though, Netanyahu came to his ally’s defense.

“His response was the most direct, saying ‘we are not willing to accept this,’” Netanyahu responded. “He [Orban] attacked Horthy at some point. They are going the furthest here.”

Netanyahu also addressed his warm welcome in January to President Petro Poroshenko of Ukraine, whose parliament had just designated the birthday of Ukrainian wartime collaborator Stepan Bandera a national holiday.

Bandera’s forces fought alongside the Nazis and were implicated in the murder of thousands of Jews. The same day Poroshenko was visiting Israel, another memorial was being erected in Kiev for Symon Petliura, whose troops are linked to pogroms that killed as many as 50,000 Jews after World War I.

Netanyahu said he was not aware of that specifically but that he had some discussions with Poroshenko on the larger issue.

“I spoke to him too. I speak to them all. It’s not that we can’t raise the issue. We raise it freely,” he insisted.

Still, he then quickly shifted attention toward the contemporary anti-Semitism from the “anarchist left” and Muslim communities.