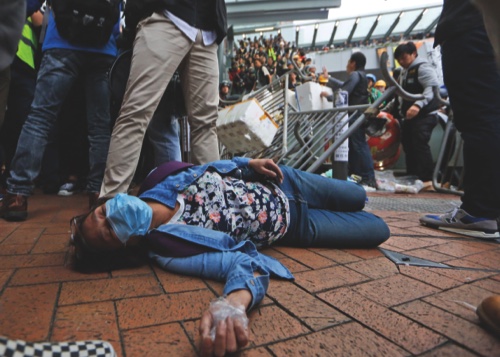 Hong Kong pro-democracy protesters face a new court ruling to clear out after Sunday night’s attempt to expand their hold on a swathe of central Hong Kong was beaten back by police.
The court yesterday granted an injunction to All China Express, a bus company, for the removal of barricades on parts of the roads protesters have occupied in the Admiralty district for more than two months.
The latest setback adds to signs that the biggest challenge to China’s rule over Hong Kong since it took over in 1997 is faltering as public support swings against the protesters. Police used pepper spray and water hoses to force back demonstrators who had sought to paralyze government operations by surrounding offices last night.
“In terms of paralyzing the government headquarters, it worked for half a day,” Alex Chow, the secretary general of the Hong Kong Federation of Students, told reporters yesterday. “But overall, it’s a failure. We could see even though we have occupied some places that it could quickly be cleared by police violently.”
In some of the most violent clashes since the start of the movement in September, dozens of students and police were taken to local hospitals. The city was forced to shut the government offices, where thousands of civil servants work, for part of the day. The police arrested at least 40 people.
The new injunction will allow bailiffs to clear barriers blocking parts of Connaught Road, Harcourt Road and Cotton Tree Drive to permit traffic to flow, the judge ruled. Last week, bailiffs and the police removed protesters from Mong Kok, one of the three sites, through similar injunctions, leading to the biggest number of arrests in a two-day period since the demonstrations started.
Those who impede bailiffs will be liable for criminal contempt charges, according to the court ruling. Student leaders will discuss the next course of action with demonstrators, Chow said.
Protesters carrying make-shift shields and wearing helmets Sunday night seized Lung Wo Road and parts of Tamar Park for several hours, before the police forced them back. By midday yesterday, the demonstrators had lost any new areas gained.
“I advise everyone who’s still occupying or thinking to return to protest sites tonight, especially the young students, not to mistake the tolerance of our police force in the past as an inability to deal with the protests,” Chief Executive Leung Chun-ying said at a press conference yesterday. “Don’t mistake police’s restraint as weakness.”
The protesters are demanding that China reverse a decision to vet candidates for the city’s 2017 leadership election. Leung reiterated yesterday that the protesters’ main demand for public nomination is unconstitutional.
The Basic Law, the de-facto constitution, calls for candidates to be selected by a nominating committee before people vote.
The pro-democracy movement has lost momentum and there are signs of growing support for the authorities’ efforts to clear the demonstrations through a mix of police and legal action. About 68 percent of 513 people surveyed by the University of Hong Kong said the government should act to end the protests, according to a poll conducted Nov. 17-18.
Police “took resolute action” against the protesters after “violent radicals repeatedly provoked and verbally abused police officers,” the government said in an e-mailed statement. Protesters threw water bottles, helmets and pepper powder at police, it said.
Sunday night’s action also drew criticism from some protesters for not going far enough.
“When the student leaders said they will escalate their actions aiming at the government, I was expecting something more,” Ka Ho, 21, a student said.

China has refused to allow a group of U.K. lawmakers to enter Hong Kong as part of an inquiry into life in the former colony under Chinese rule. Richard Ottaway, chairman of the U.K. Parliament’s Foreign Affairs Committee, called for an emergency debate in the House of Commons after he was told by a senior Chinese diplomat that the lawmakers would be barred from entering the city. Chinese officials said the visit would be seen as support for the democracy protesters.
“China has repeatedly expressed its objection to Britain sending MPs to conduct so-called investigations in Hong Kong,” China’s Foreign Ministry spokeswoman Hua Chunying told reporters yesterday in Beijing. “It would be a confrontation on their part if some of the MPs insisted on carrying on with the plan. Fion Li and Vinicy Chan  , Bloomberg