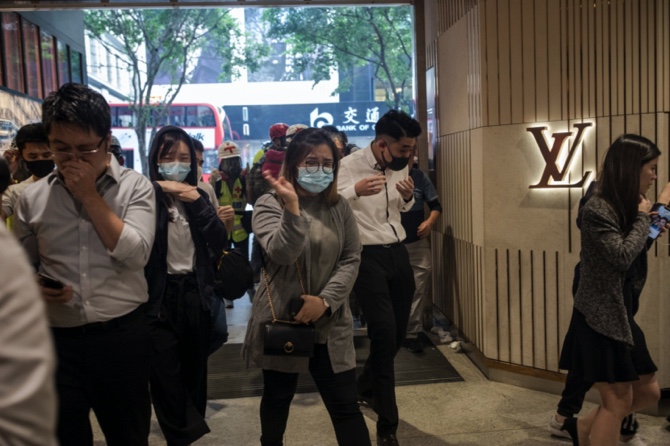 Major Hong Kong banks spent their morning telling employees to commute carefully, and by afternoon yesterday began urging them to consider going home as police lobbed tear gas at protesters on the streets outside.

“Your safety is our top priority,” HSBC Holdings Plc wrote to staff around lunchtime, inviting them to use their judgment in leaving and noting the firm will remain open. “Please take laptops home if you are able to work remotely.”

Most of the city’s major investment banks and other financial firms tried to operate normally, though some lenders closed branches near flareups as a precaution, after the death of a student fueled a surge of unrest.

For much of Hong Kong, the morning presented one of the tensest commutes in months as demonstrations closed some subway stations. As employees arrived at JPMorgan Chase & Co.’s main offices, police in riot gear could be seen gathering across the street.

Pro-democracy demonstrations escalated further after an officer shot two protesters. By lunch, television footage showed workers in business suits and skirts covering their faces and flocking into the Landmark Mall in Central – an area flanked by bank towers – to escape tear gas. Meantime, banks sent workers fresh waves of emails urging them to be careful.

Bank of America Corp. and Goldman Sachs Group Inc. also gave employees the option of heading out, and UBS Group AG is planning a similar move, according to people with direct knowledge of the internal conversations.

“Ongoing public events are impacting travel and may continue in the coming days,” HSBC said in its message to staff. “You are encouraged to make plans to leave the office early and under safe conditions if you foresee disruption to your commute.”

BNP Paribas SA promised workers it would monitor the situation and alert them to new developments. Employees there can confer with managers to decide what to do.

“Continue to exercise care and caution whilst traveling to or around our office premises,” the bank cautioned them in a memo. “Please also remember to carry your laptops to and from work on a daily basis.”

Also yesterday, foreign consulates in Hong Kong were warning their citizens to stay indoors last night. The French Consulate advised its citizens to go back home earlier than usual if they can manage their time to do so. MDT/Bloomberg