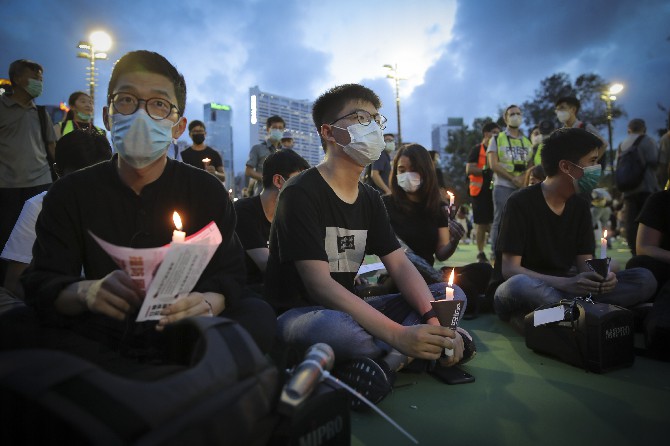 Hong Kong authorities for the second year have banned the June 4 candlelight vigil to commemorate the bloody crackdown on pro-democracy protests in Beijing’s Tiananmen Square, organizers said yesterday.
The Hong Kong Alliance in Support of Patriotic Democratic Movements of China, which organizes the candlelight vigil annually, said in a statement that the police had objected to the event in light of social distancing restrictions, which prohibit large gatherings.
For years, Hong Kong and Macau were the only cities in China where people were allowed to mark the 1989 anniversary of Beijing’s crushing of the Chinese democracy movement.
The vigil was also banned in Macau this week by the authorities.
The ban on the vigil comes as Beijing has tightened control over the semi-autonomous Chinese city, after months of anti-government protests in 2019.
Beijing and local authorities have cracked down on dissenting voices, launching mass arrests of pro-democracy activists and imposing a sweeping national security law to penalize crimes like secession and subversion.
Yesterday, the legislature passed a bill amending electoral laws that drastically reduces the public’s ability to vote, while increasing the number of pro-Beijing lawmakers making decisions for the city.
Last year, the June 4 vigil was banned for the first time, with police citing public health risks from the coronavirus pandemic. Still, thousands turned up at Victoria Park — where the vigil is held each year — singing songs and lighting candles. No arrests were made at the time.
More than 20 people, including activist Joshua Wong, media tycoon Jimmy Lai and Lee Cheuk-yan, a leader of the alliance, were arrested later and charged for taking part in an unauthorized assembly. Wong and three district councilors were sentenced on May 6 to between four and 10 months in jail after pleading guilty.
Organizers this year have urged people to light a candle no matter where they are on June 4. MDT/AP