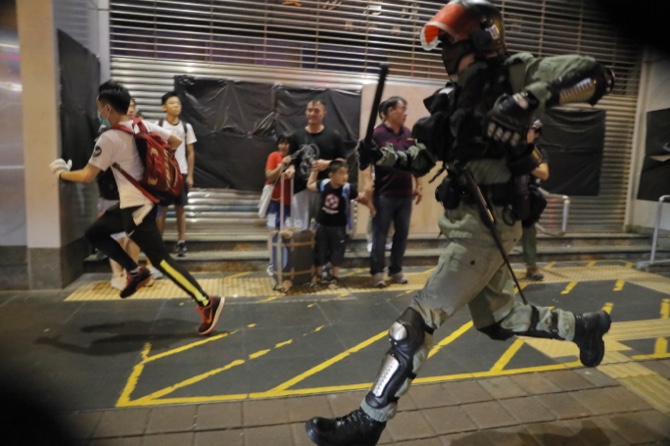 Tearing a page out of ancient Chinese military philosophy, black-clad protesters in Hong Kong changed tactics and wreaked havoc by popping up in small groups in multiple locations across the city yesterday, pursued by but also often eluding police who made scores of muscular arrests.

Violence spiraled as protests stretched from the afternoon into the night, with police struggling to restore order.

A savage beating after dark by a group of masked protesters left a man bleeding profusely. Police said an officer was attacked from behind with a sharp weapon earlier in the day and was left with a bleeding neck wound.

Video broadcast on Hong Kong television also showed a masked, black-clad protester dropping a riot officer with a flying high kick, followed by two other protesters who beat the officer on the ground and tried unsuccessfully to snatch his gun.

The guerrilla-like tactics sought to maximize the disruption and visibility of protests at a time when anti-government demonstrations have, as a whole, been showing signs of flagging as they stretch into a fifth month. Pressure from a government ban on the face masks worn by many protesters and extreme violence earlier this month appear to have cooled the ardor of some demonstrators and whittled down protest numbers.

Online calls for gatherings to start at 2 p.m. in dozens of malls, parks, sports grounds and other locations triggered an afternoon of mayhem and marked a shift from earlier more concentrated rallies in fewer spots.

“We’re going to be more fluid and flexible,” said Amanda Sin, 23, an office worker who joined a peaceful protest outside police headquarters in central Hong Kong. “We are interchanging different tactics.”

Roaming clumps of hardcore protesters — too numerous, elusive and fast-moving to be policed — popped up out of nowhere, vandalizing stores, blocking traffic with makeshift barricades and spraying protest graffiti, often holding up umbrellas to shield their activities from view.

Masked protesters wielding hammers wrecked a Huawei store that was apparently targeted because of the brand’s links to mainland China. On another store broken into and trashed, protesters sprayed, “We are not stealing.” The words “black heart” were sprayed in black inside a vandalized Starbucks, another frequent target of the anti-government and anti-China protests that have gripped the semi-autonomous Chinese territory since June.

Changing strategies to adapt to shifting circumstances is a notion deeply engrained in Chinese thinking, notably detailed in the ancient military treatise “The Art of War,” and inspiring Mao Zedong’s Communist revolutionaries on their route to seizing power in China in 1949.

In Hong Kong, protesters speak of being “like water,” fluid and adaptable.

“It’s a guerilla-kind of demonstration,” said Edmund Tang, 59, who slept overnight at the rally outside police headquarters that started Saturday and was still going strong yesterday with about 200 people, many of them retirees.

He said the week-old ban that makes the wearing of masks at rallies punishable by one year in jail dissuaded some demonstrators who had taken part in larger previous demonstrations.

“It’s no longer possible to get 100,000 people to come out,” he said. The idea of protesting in small, diffuse groups was in part aimed at complicating policing efforts, Tang added.

“Keep the hunt dogs running everywhere, getting crazier and crazier, without catching the prey. That’s best,” he said.

Police adapted, too, fanning out in multiple locations and quickly making arrests. Speeding police vans were on the scene within minutes after black-clad protesters set up a makeshift roadblock in a shopping district in Kowloon. One van rammed through a barricade of piled-up bamboo poles and officers sprinted off in pursuit of suspects.

Police pinned detainees to the floor and hauled them away. They held aloft blue banners ordering people to disperse. In one incident, officers fired tear gas rounds from a van before speeding away. Other patrols pointed riot-control guns and cans of pepper spray to keep crowds at bay and hammered on their plastic riot shields as they cleared streets. Bystanders responded with torrents of abuse.

As police hared after suspects in one area, protesters sprang up in others like the “Whac-A-Mole” arcade game, overwhelming the spread-out policing effort.

One of the largest gatherings brought several hundred people together in a shopping mall in Shatin. A masked protester played the saxophone. On the closed metal shutters of a subway station, another protester dressed head-to-toe in black sprayed, “When dictatorship is a fact, revolution becomes our duty.”

Before dawn, protesters also clambered up a peak and erected a 4-meter tall white statue of a demonstrator in a gas mask, dubbed “The Lady Liberty of Hong Kong,” that gazed over the restive city.

The protests gripping the international business hub began in response to a now-withdrawn extradition bill that would have allowed criminal suspects to be sent for trial in Communist Party-controlled courts in mainland China. The movement then ballooned to encompass broader clamors for universal suffrage, an independent inquiry of the policing methods used against protesters and other demands. JOHN LEICESTER, HONG KONG, AP