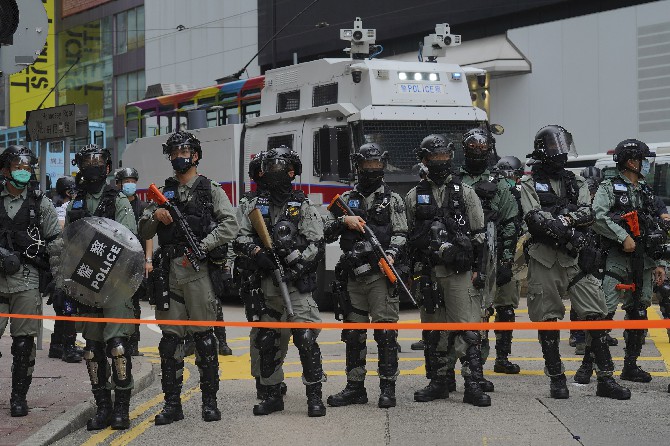 Hong Kong is bracing for what could be its biggest day of protests in months, with pro-democracy groups calling for a general strike against China’s latest moves to increase control of the city.
Protests are planned for today near the Legislative Council building in central Hong Kong, where lawmakers plan to hold a hearing on a bill that would criminalize disrespect toward China’s national anthem. They are also fighting against China’s plans to impose a national security law that opponents fear will curtail essential freedoms and criticism of the Communist Party.
The Hong Kong Confederation of Trade Unions, which represents 145,000 members, has called for a general strike. More than a dozen high school student groups have also issued a joint statement urging their peers – newly returned to campuses following months of closures induced by the coronavirus – to strike.
The Communist Party “is blatantly targeting Hong Kong people’s revolution in the past year, spelling an end to the people’s democratic autonomy and freedom of expression,” they said in the statement, which was shared on the Facebook page of leading activist Joshua Wong’s pro-democracy group, Demosisto. “Hong Kong students will not be able to speak freely in the future and instead be scrutinized for every word and be at risk of incarceration.”
Hong Kong’s police force has readied 3,500 riot officers in anticipation of the protests, local Cable TV reported, citing unidentified people. Television footage showed newly added metal and water-filled barricades near the city’s legislature, Central Government Offices and People’s Liberation Army garrison building.
Chen Daoxiang, commander of the PLA garrison in Hong Kong, said yesterday that the army “firmly” upheld the NPC’s plan.
The decision “shows our firm determination in safeguarding the country’s sovereignty and territorial integrity,” Chen said in an interview with China’s official military news site. “The garrison will firmly implement China’s decisions and plans, comprehensively implement the ‘one country, two systems’ principle and discharge defense duties in accordance to the law.”
The fresh round of protests comes days after Beijing announced it would bypass Hong Kong’s legislature to implement national security legislation banning subversion, secession, terrorism and foreign interference in the former British colony. Key details about the bill remain unclear.
Reuters, citing unidentified people familiar with the matter, said Tuesday the legislation is set to block foreign judges in Hong Kong from handling national security trials. Central and city government security agencies would also set up in Hong Kong as part of the legislation, which is subject to change and expected before Hong Kong legislative elections in September, the report said.
Despite criticism from foreign governments, Chief Executive Carrie Lam defended the security law yesterday, asserting that local residents supported it. She said it was untrue that the new measure would ban street protests or calls for her dismissal, and pledged that Hong Kong’s freedoms would be preserved. She said earlier this month that the anthem bill would get priority in the city’s legislature.
“We are a very free society, so for the time being, people have the freedom to say whatever they want to say,” she told reporters. “Hong Kong’s vibrancy and core values in terms of the rule of law, the independence of the judiciary, the various rights and freedoms enjoyed by people will continue to be there.” Bloomberg