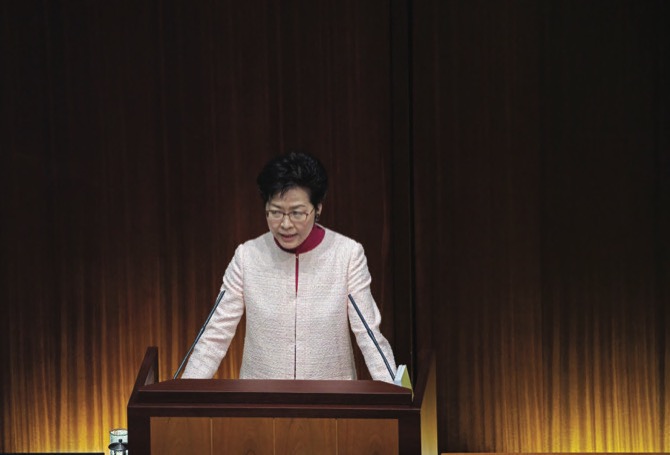 The Chief Executive of Hong Kong, Carrie Lam, is disappointed with the Legislative Council of Hong Kong because the council, in its first meeting, failed to elect the chairman and vice-chairman to scrutinize the 2019 Fugitive Offenders and Mutual Legal Assistance in Criminal Matters (Amendment) Bill, commonly referred to as the extradition bill.

Last week, the bill’s committee held its first meeting without having selected a chairman.

“It is only a simple matter choosing the chairman, but it was not completed within two hours. I believe it is unprecedented in the history of the Legislative Council,” said Lam. “The SAR government expresses its disappointment and pity.”

On April 30, the committee will hold its second meeting.

Lam hopes that, during the second meeting, the chairman and the vice-chairman of the bill’s committee can be elected so that the relevant deliberation works may soon be carried out.

The bill stipulates that special surrender arrangements will be applicable to Hong Kong and any places outside Hong Kong, including mainland China.

There are groups in Hong Kong that expressed their concern over proposed changes to the city’s extradition law, which would allow suspects to be sent to mainland China, where some say could be subject to unfair prosecution and torture.

“From the perspective of protection, regardless of the protection of human rights or the procedural protection, the set of standards we have proposed today is no different from the international standards,” Lam expressed, regarding the amendment proposal.

“Some opponents said that it would not work as long as it involves mainland China. Some people even think that there is no problem in the content of the amendment, and that it can be passed within one month, as long as mainland China is removed. Such [an] argument is very biased, and it even has a purpose behind it,” argued Lam.

Despite her great disappointment in the failure to select the chairman for the bill’s committee, Lam still stressed that she is strongly determined to deal with the legal loopholes that have gone unchallegend by Hong Kong’s current extradition law.

Democrats in the Hong Kong Legislative Council are expected to continue filibustering the bill, whereas some pro-government lawmakers have suggested that they could bypass the entire scrutiny process if the deadlock continues.

However, the president of Hong Kong Legislative Council, Andrew Leung, has already expressed that it is not advisable to hand the amendment directly over to the general assembly, as this time it involves a controversial bill that needs to be dealt with in accordance with a consistent procedure.

Lam expressed that she may not have the political capability and power to solve the problems arising from the controversial piece of legislation.

“I regret to say I may not have the political capability to rectify the situation, because some lawmakers are now asking me to step down,” she said.

As of January 2019, China has already signed extradition agreements with 56 countries in the world, including six developed countries, namely Australia, Portugal, France, Italy, Spain, and Belgium.