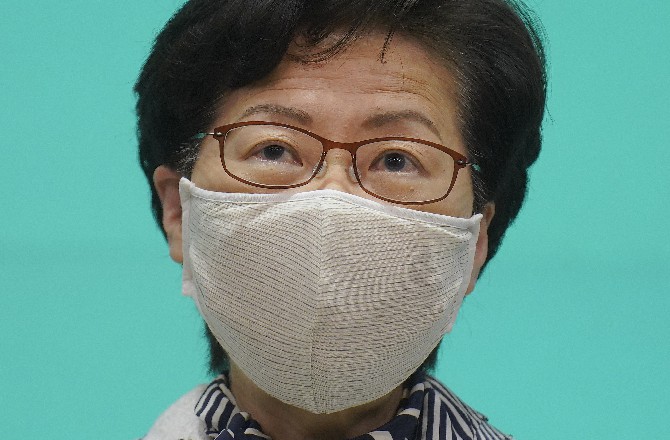 Hong Kong leader Carrie Lam said yesterday that she hopes opponents of a new national security law being imposed by China do not “demonize and stigmatize” the legislation because doing so would mean pitting themselves against residents of the semi-autonomous Chinese territory.
“The people of Hong Kong want to see stability again, they want a safe environment where they can work and live,” Lam told reporters.
She said people were “sick and tired” of violence in Hong Kong and intervention by foreign forces in the city.
China’s ceremonial parliament in May approved the decision to enact a national security law in Hong Kong, aimed at curbing subversive, secessionist, terrorist and foreign intervention activities in the city following months of anti-government protests last year.
“We are part of the People’s Republic of China, but we don’t have a mechanism to protect national security,” Lam said. “This is a risk not just to over 7 million people in Hong Kong, it’s also a risk to 1.4 billion people in the country.”
Lam spoke ahead of a meeting this week by the Standing Committee of the National People’s Congress, which exercises legislative power in China. The law is not on the meeting’s agenda, but Hong Kong delegate Tam Yiu Chung said in an interview Monday that items could be added.
Critics consider the imminent legislation an attack on the “one country, two systems” framework in which China promised Hong Kong a high degree of autonomy and freedoms not found on the mainland when the former British colony was returned to Chinese control in 1997. They fear that the law will be used to curb any dissent in Hong Kong.
Details about the law have not been disclosed, though Lam said the specifics will be established. She said people “don’t need to worry” about this because at the end of the day, it is for Hong Kong’s authorities to enforce the law.”
“Please accept and understand why we have to do it,” she said. “The only purpose of this task is to protect Hong Kong and the country.”
The anti-government protests had subsiding during coronavirus restrictions, but have returned to the city in recent weeks, even though social distancing measures remain in place.
Lam said Hong Kong will relax its measures gradually.
“It would be risky if we completely lift the measures,” she said. “In recent times in some cities such as Beijing, we have seen imported cases and some countries have seen an influx of cases after relaxing measures.”
Hong Kong’s secretary for food and health, Sophia Chan, said yesterday that the ban on public gatherings will be relaxed from eight to 50 people.
Restaurants will no longer be limited by capacity. For establishments such as bars and karaoke lounges, the maximum number of guests per table will be doubled from eight to 16.
“The relaxation is made in light of the easing of the epidemic. We also realize that certain activities must resume,” said Chan, who stressed that there was “no political consideration” involved in limiting the number of people allowed in public gatherings.
Separately, a group of over 50 protesters gathered in a shopping mall in the city’s Causeway Bay shopping district despite heavy riot police presence, shouting slogans and holding up flags that said “Liberate Hong Kong, Revolution of our times.”
Police stopped and searched several people near Victoria Park, where protests were initially supposed to take place but were later canceled. They did not appear to make any arrests. AP