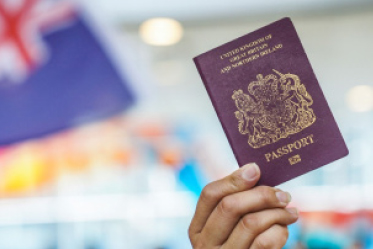 Hong Kong is unlikely to see an exodus under a U.K. visa program for holders of special British passports, a top government adviser said, predicting that some would be offset by arrivals from mainland China.
The number departing British National (Overseas) passport holders would be “far, far smaller” than current estimates of as many as 1 million over the next five years, Executive Council Convener Bernard Chan said this week. While the former British colony has seen people flee in the past, such as before its return to Chinese rule in 1997, “either they return or there’s new immigrants coming in,” Chan said.
There’s now a large pool of talented mainlanders to take the place of those who leave, Chan said. He described those departing as a mix of people who don’t trust China, who want a better education for their children or who “think they may not be as competitive” in an economy that increasingly values workers who can help companies win business in China.
“If you look at foreign firms, they’re all hiring mainland returnees,” Chan said. “Their clients are all Chinese from the mainland. Can you blame them?”
On Sunday, the U.K. will begin accepting visa applications for as many as 2.9 million BNO-eligible Hong Kong residents and dependents who together make up almost 70% of the local population. London announced the move after Beijing imposed a sweeping national security law in June, which the U.K. government called a “clear and serious breach” of the 1984 treaty that paved the way for Hong Kong’s return.
China justified the security measures barring subversion, terrorism, secession and collusion with foreign forces as a necessary tool to end sometimes-violent protests that hit the city in 2019, while the U.K. said the new law “restricts the rights and freedoms of the people of Hong Kong.” Some pro-Beijing politicians in Hong Kong have called for measures to only allow city residents to hold one passport.
Yesterday, Hong Kong Chief Executive Carrie Lam said the security law was “on par with, if not superior to” similar legislation in the U.S. and urged the Biden administration to give it a “fair” review. “Given the extreme social unrest and violence that overwhelmed Hong Kong in 2019, the enactment of the national security law by the central authorities was both necessary and rational,” she told a forum on U.S.-China Relations.
While Chan acknowledged that some residents had begun to relocate, he argued that new arrivals had offset previous waves of outward migration, such as after China’s crackdown on Tiananmen Square activists in 1989. Others returned to the city once things settled down.
“Right now, we’re still in the middle of the storm – it’s not a good time to assess the situation,” Chan said. “But either way, it won’t come close to the number of people being projected.” Bloomberg